Nintendo Switch sales surged by triple digits in Europe during COVID-19 lockdowns, and helped raise overall hardware adoption by 84% in the region. 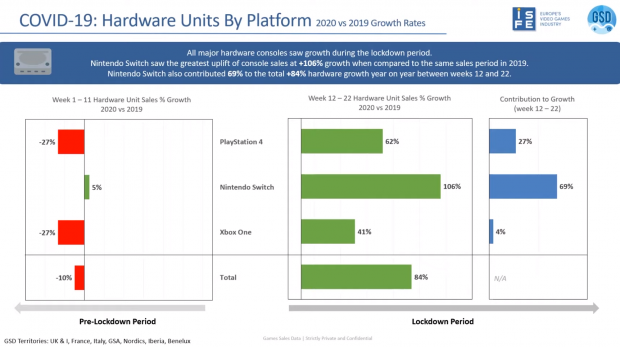 COVID-19 is surging sales revenues for the games industry. Sony and Microsoft just reported record quarters for games earnings, and Nintnedo is poised to do the same. But not all regions are the same, and analyst firm GSD shows some interesting metrics.

According to GSD, all three major consoles saw a sharp uptick in sales during COVID-19. The Switch in particular grew triple digits by 106%, reflecting the console's scarcity across the globe right now.

"What we do see mainly is the increase in network software, which did see a growth of 127%. This is actually due to a lot of consumers remaining at home and actually put their spend more towards online digital fronts such as the PlayStation Network or Xbox LIVE,"said senior GSD analyst Aidan Nakiris

"As the official lockdown period started, we did see all consoles grow double digits, and even the Nintendo Switch at triple digits at 106% growth year-over-year.

"This may be linked to the release of Animal Crossing: New Horizons, but the console also adds lots of family-friendly experiences as well. 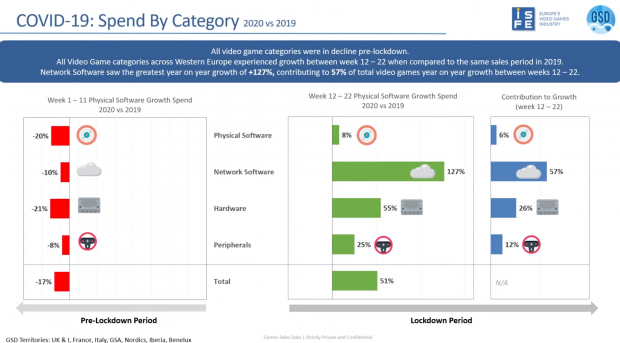 "But that's not to say the PlayStation 4 and Xbox One didn't have their growth as well. Their growth also grew considerably throughout this period alongside a whole bunch of new releases that launched during the period."