The new game from Greedfall developer Spiders Studios is extremely unique and lays out an interesting proposition: What if King Louis XVI quelled the French Revolution with an army of robots?

Spiders' new game Steelrising is rather interesting. It takes place in 18th Century France just before the disastrous and brutal French Revolution tore down the monarchy. King Louis XVI is in power and plans to smash any opposition with his brutal new mech army. Spiders says Steelrising is more action-oriented than Greedfall, Technomancer, or Bound By Flame, but didn't show any actual gameplay. It's possible this could be a very NieR-esque game that's cemented in the studio's native history.

In Steelrising, you play as Aegis, a powerful female automaton who serves as the personal protector of Queen Mary Antoinette. The teaser clearly shows Aegis as she leads a charge against corrupted robots. We should expect themes of transhumanism as well as Detroit: Become Human-style existential moments. 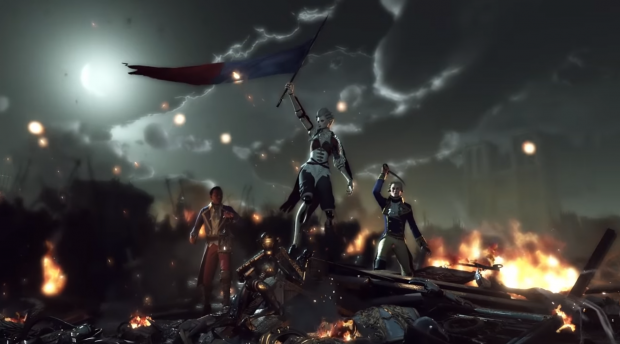 "For Steelrising, we created a new and original universe especially for the game, and a very much more action-focused approach than our previous titles," said Spiders Studio CEO Jehanne Rousseau.

"In Steelrising you play as Aegis, an automaton in female form, a masterpiece that serves as the bodyguard to Queen Marie Antoinette."

"Queen Mary Antoinette has ordered us to seek out our creator to put an end to the massacres carried out by the robot army of King Louis XVI, who seems to have gone made whil trying to supress the nascet revolution by unleashing an army of out-of-control robots.

"Your mission is to try and stop that."

Steelrising merges authentic history with sci-fantasy and will take place in Victorian Paris. It will also feature legendary landmarks and buildings from the 18th Century, including the Grand Chatelet and the Tour du Temple.

"When we approached Steelrising our basic premise was: What would've happened if Louis XVI had been a tyrant and could indulge his passions for machines and automatons to crack down on the revolution in early stages?

"It's a world we've tried to make as deep and varied as possible."

No release date was given for Steelrising, but we do know it's being made for next-gen PlayStation 5 and Xbox Series X consoles.