Commonwealth Fusion Systems (CFS) has announced that it has raise $84 million in a second round of Series A funding, with the MIT spin off using the funds to continue its work on commercializing fusion energy.

The company has now raised $200 million since it first opened its doors in 2018, with the first round of funding seeing CFS secure $115 million in June 2019. Commonwealth Fusion Systems is all-systems-go towards meeting its goal of making commercial nuclear fusion a reality, and that could be much sooner than you think.

Commonwealth Fusion Systems boss Bob Mumgaard explains: "We're in a unique position where it's still something that's far enough in the future that any of the recovery models are not going to affect the underlying needs that the world still has a giant climate problem".

If you didn't already know, there are many nuclear fusion reactors that are currently in development -- but CFS is hoping that it can deliver something truly next-generation. Commonwealth Fusion Systems has some tricks up its sleeve thanks to the brains at Massachusetts Institute of Technology (MIT).

TechCrunch writes: "Commonwealth Fusion Systems core innovation was the development of a high power superconducting magnet that could theoretically be used to create the conditions necessary for a sustained fusion reaction. The reactor uses hydrogen isotopes that are kept under conditions of extreme pressure using these superconducting magnets to sustain the reaction and contain the energy that's generated from the reaction. Designs for reactors require their hydrogen fuel source to be heated to tens of millions of degrees".

Furthermore, there's the ITER project (International Thermonuclear Experimental Reactor) that is in development over in France. The ITER project has been in the works since the 1980s and was a partnership between the US, the Soviet Union, a few European nations, and Japan. It later expanded to include China, India, and South Korea.

The ITER project has had a considerable budget hike over CFS, with over $14 billion across the decades. The ITER project wants to turn its fusion reactor on by 2025, too.

You can read more about the fusion reactor that Commonwealth Fusion Systems is building here. 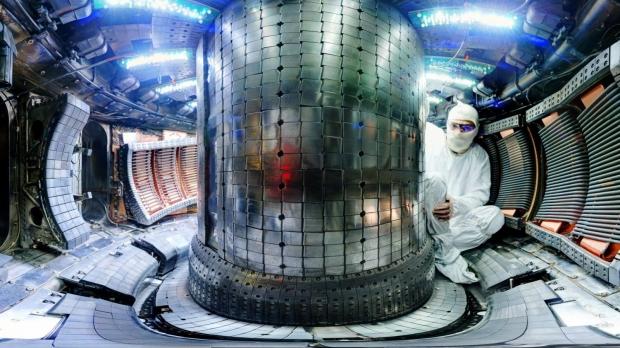