A new NoClip documentary spills details about one of the coolest Half-Life games that never released.

In 2007, Arkane Studios was working on a Half-Life 2 expansion called Ravenholm. The game starred an HEV suit-wearing Adrian Shephard (yes, Shephard from Opposing Force) and had a decently playable alpha build complete with polish, lighting effects, physics systems--the works. Arkane had actually designed 9-10 mission for Ravenholm before the project was abruptly cancelled by Valve.

Ravenholm was pretty innovative and quirky in its own ways. It introduced new weapons like the nailgun, which shot spikes that could conduct electricity to solve puzzles and interact with the environment in big ways. The game had lots of physics hijinks and looks pretty damn fun. You could wreak total havoc on the environment by setting traps for enemies, for instance. There was also the charge gun, an electricity-powered gun that could be refilled by nearby electric arcs and sparks.

Gameplay was basically Half-Life 2 mixed with Left 4 Dead...without multiplayer. You ran around the city solving puzzles and completing objectives for Gregory while fighting hordes of undead. You could activate turbines to mass-slaughter them, do cool tricks with electricity, and overall blast them with classic weapons like the assault rifle or shotgun.

"We made 9 or 10 missions with a few missing scenes between certain maps, with vehicles," Arkane art director Sebastien Mitton said in the doc.

"But basically, you need to help Gregory solve puzzles, get energy back into the Western and Eastern wings, etc.

"We thought it was interesting to change the character. I loved Adrian Shephard from Opposing Force, and all the idle animations in first-person, they did a fantastic job.

"Artistically we sometimes had trouble because Valve was working on the Source engine, some of the textures wouldn't work, they provided support to explain how to optimize the textures, brushes and levels, how to implement objects on the walls because the lighting was different for objects and brushes.

"Then when the project was cancelled were were like 'What? No, no no, we can't stop there!"

"For two weeks we put everything in there, the design prototypes, the monkeys, the lighting, all the levels. It's basically in an alpha state." 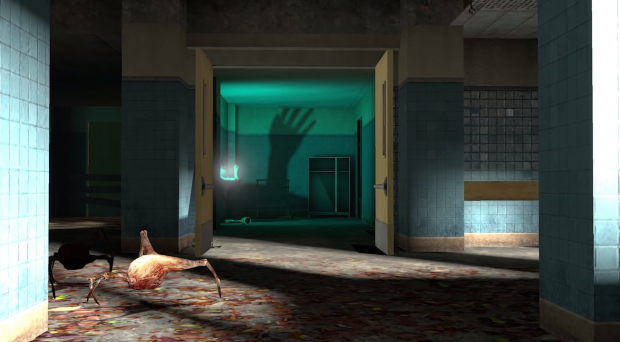