The Embracer Group (formerly THQ Nordic) now has a staggering 118 projects in development across its myriad of studios, up from Q3's 96 projects. 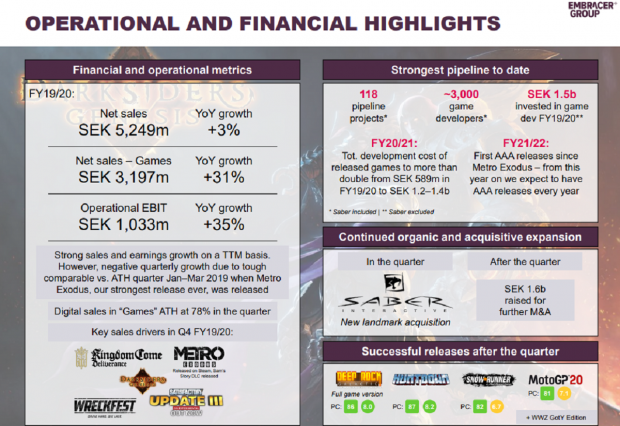 In its recent earnings report, The Embracer Group outlined its new slate of in-development games. Embracer now has 118 games in the works, up 22 games from last quarter's numbers. And 69 of them haven't been revealed.

So what changed? Embracer's buyout of Saber Interactive raised the project count, along with other unannounced titles from other studios.

The company is one of the biggest gaming firms in the world, commanding 3,000 developers across 92 worldwide teams. Embracer also has access to 163 intellectual properties, many of which are wholly-owned by subsidiaries like Deep Silver and THQ Nordic.

"With the acquisition of Saber Interactive, the Group currently has over 118 games under development including 69 still yet to be announced titles," Embracer CEO Lars Wingefors said in the earnings report.

Bigger games like Saints Row V has been delayed to FY2021 along with the other major AAA game (which could be Dead Island 2).

The current Fiscal Year 2020 release slate looks like this: