The world's first real-time PlayStation 5 gameplay footage was a dazzling tech demo that pushed the hardware to its limits. How far? The PS5 devkit was able to steadily maintain 1440p 30FPS "most of the time" with cinematic-quality 8K textures, global illumination, and other new advanced techniques. 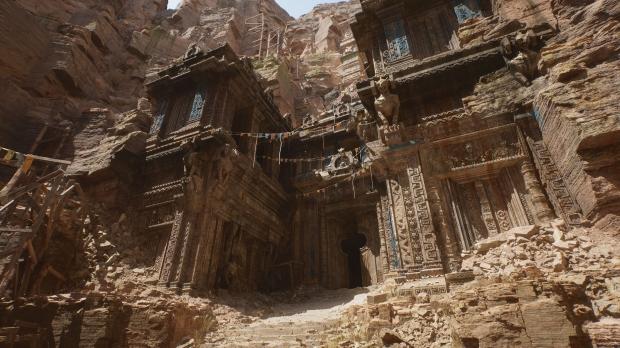 The new Unreal Engine 5 footage was absolutely incredible and gave us a taste of next-gen console gaming. But there's a few caveats. For one, it's a tech demo, not an actual game. Yes, it's playable with live source code on a PS5 devkit, but it won't actually ship. And two, the demo required intense horsepower for its Nanite system to render the billions of triangles needed for the scenes, and wasn't able to hit 60FPS on the PlayStation 5's 10TFLOP Navi GPU. It also required dynamic resolution scaling, which adjusts resolution on-the-fly to lock in a consistent frame rate. For reference, most of the PS4 Pro's 4K games have dynamic resolution scaling and few are native 4K.

Epic's VP of Engineering Nick Penwarden says the demo hit 1440p 30FPS on PlayStation 5 with dynamic resolution scaling enabled--the resolution spot between 1080p and 4K but at the lower FPS range for these kinds of action-adventure experiences.

"Interestingly, [Nanite] does work very well with our dynamic resolution technique as well. So, when GPU load gets high we can lower the screen resolution a bit and then we can adapt to that. In the demo we actually did use dynamic resolution, although it ends up rendering at about 1440p most of the time," Penwarden told Eurogamer.

If we look at the tech demo as a pure demonstration on what's technically capable, things come into context. This won't be the baseline for all games. Most games won't be able to pull this off, and it's kind of a theoretical current ceiling for performance under this kind of graphics load.

But the demo does showcase the potential of Nanite, the new Unreal Engine geometry system that allows devs to render a single triangle for every pixel to completely eliminate perceivable LOD, meaning no texture pop-ins when you enter a new area.

Armed with Nanite, devs can inject cinematic-quality 8K textures into scenes. They can replicate tons of in-game assets into a scene without any real work or input, and have UE5 render everything in real-time. Nanite is a game-changer, but it comes at a hefty GPU cost, and in this regard the Xbox Series X's 12TFLOP GPU might push things even further.

Another thing to note is that raytracing wasn't turned on in the demo. The footage only used Lumen, a new global illumination system that injects high-end lighting effects into a scene and also reacts to the environments and animations.

With raytracing turned on, FPS performance could drop even more as raytracing typically takes a hit on frame rate. This might be mitigated somewhat with Variable Rate Shading, which helps blur out specific scenes unnoticably and boost FPS along the way.

Unreal Engine 5 is due out in 2021, so don't expect any PlayStation 5 launch games to utilize the tech.

Check below for more quick info on UE5's new methods: