One of the things that long sat iPhone and Android messaging apart is that Apple's iMessage has had some features that Android users didn't have. Android users did get some improvements when RCS messaging rolled out, but it wasn't exactly what many users hope for. Some Android users have spied a new Google Messages feature in the wild that many Android users will be excited about. 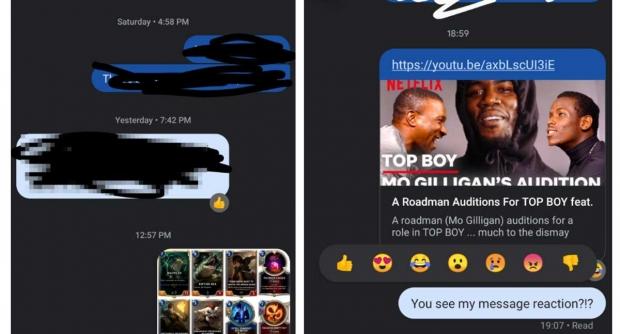 That feature is reactions that allow users to share Facebook -like reactions to RCS chat conversations with various emoticons. Available emoticons include a thumbs up, laughing face, surprised face, sad face, angry face, and a thumbs down icon. Apple's iMessage for iPhone users has something similar with the ability to hold down a message and select a heart icon, thumbs up icon, thumbs down, "haha" icon, "!!" icon, or "?" icon.

According to those who have seen the reactions feature live in Android Messages, accessing the reactions is done by long-pressing a message. Currently, the reactions appear to have a fallback for users with devices that don't support reactions directly on messages. The fallback looks like the image below. Reports indicate that the new reactions don't appear in the web-based Google Messages platform.

It's unclear when this feature will roll out widely for Google Messages users. Android Police notes that when testing using the new beta Messages application, the reaction options don't appear. It's unclear exactly how users who have reported seeing the reactions were able to access them at this time. In other Android news, we learned in February that Android 11 would have six beta releases before the final release that was scheduled for Q3 2020. There's a possibility that launch will change in the wake of the coronavirus pandemic.