If you had to be on lockdown during a quarantine, I couldn't think of a better place than a $590 million superyacht -- but would you really boast about it on social media? Probably not. 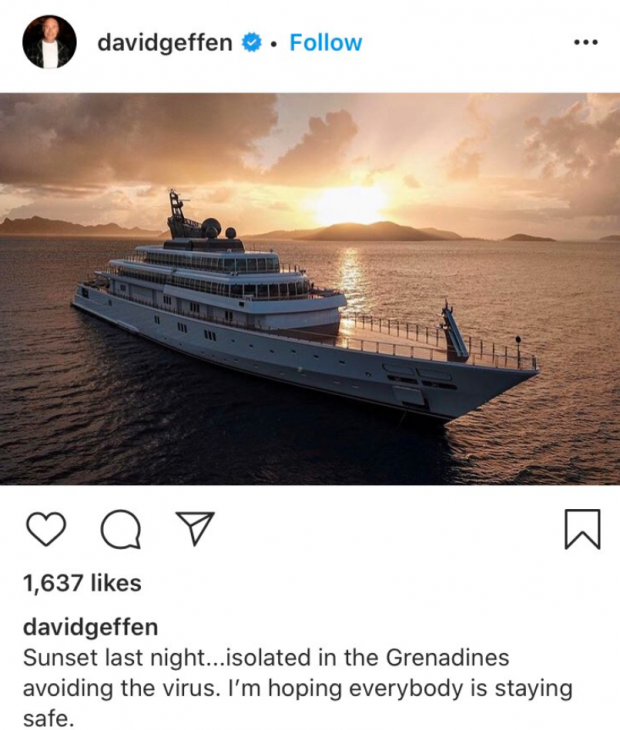 Except, that's what billionaire David Geffen did. The DreamWorks co-founder posted a picture on his personal Instagram, saying he was on "quarantine" on his $590,000,000 superyacht with the caption: "Sunset last night... isolated in the Grenadines avoiding the virus. I'm hoping everybody is staying safe".

It wasn't long before social media tore Geffen a new one, saying that his post on Instagram talking about being quarantined on a $590 million superyacht was "tone deaf" considering the hardships people are going through right now. Even The View co-host Meghan McCain chimed in, saying: "David Geffen is worth 8 billion dollars! For God's sake help this country get ventilators, our health workers masks and the medical supplies they need! Or no, just stay on your f---ing yacht instagramming. This is just shameful and grotesque".

Film producer Robby Starbuck chimed in, saying: "Is anyone shocked that Democrat donor David Geffen posted such an out of touch photo? He might as well have take a picture flipping everyone in America off. David Geffen's thought process: 'Hey you know what, millions are losing their jobs, can't pay their rent and they're worried about a deadly pandemic, I bet they'd love to know how I'm doing. Fire up the copter so we can take some more pics of my yacht! They'll love this!!!"

Working on Yachts and Superyachts