Amidst all the doom and gloom recently, fresh data was released earlier today from the European Space Agency (ESA), showing increased nitrogen dioxide emissions over China, as monitored by its Copernicus Sentinel-5 Precursor observation satellite.

In a recent tweet by ESA, embedded above, a 10-day moving average graphic shows levels of NO2 from December 20, 2019 till March 16, 2020 from the Copernicus Atmosphere Monitoring Service (CAMS). In December and January, we saw a high measured amount of nitrogen dioxide, which starts to reduce over time. By the end of January, the levels of nitrogen dioxide reduced significantly till around the start of March, which shows a build-up again, particularly in the northern regions of China.

This animation, using data from the Copernicus Sentinel-5P satellite, shows the nitrogen dioxide emissions from 20 December 2019 until 16 March 2020 - using a 10-day moving average. The drop in emissions in late-January is visible, coinciding with the nationwide quarantine, and from the beginning of March, the nitrogen dioxide levels have begun to increase.

Josef Aschbacher, ESA's Director of Earth Observation Programmes, says, "Satellites offer a unique vantage point to monitor the health of our planet. Sentinel-5P is one of seven Copernicus satellites in orbit today. It currently provides the most accurate measurements of nitrogen dioxide and other trace gases from space.

"As nitrogen dioxide is primarily produced by traffic and factories, it is a first-level indicator of industrial activity worldwide. What is clearly visible is a significant reduction of nitrogen dioxide levels over China, caused by reduced activity due to COVID-19 restrictions, but also the Chinese New Year in January."

Yesterday, many news reports surfaced claiming that China is "getting back to normal". Some flights have resumed, some factories are re-opening, school classes are slowly returning, bars have been allowed to open, and more. Many have doubted these claims, but the evidence of increased NO2 levels may back up these claims.

There may be light at the end of the tunnel, after all. 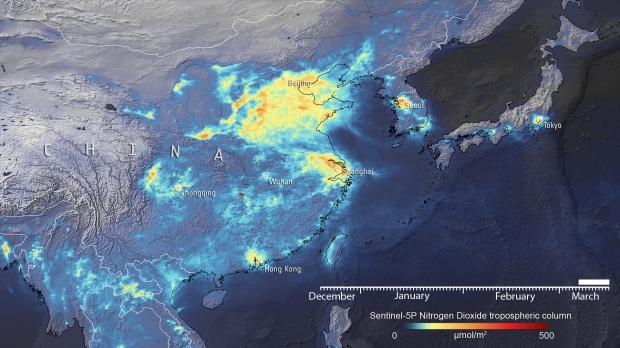 Nitrogen Dioxide NO2 Detector by FORENSICS