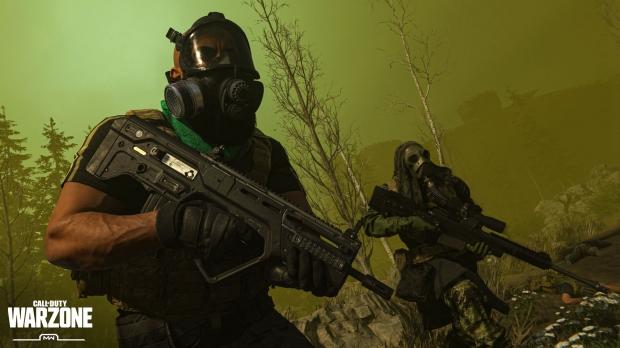 Call of Duty's new free-to-play Warzone battle royale is growing faster than Apex Legends and Fortnite. Thanks to a tremendous signal boost from streaming titans like Ninja and Dr. Disrespect, the 150-player BR has attracted 15 million players in 3 days. The BR was at 6 million downloads in its first day. Warzone has now grown by an incredible 9 million players sequentially in just two days.

Here's a visual graph to show this growth: 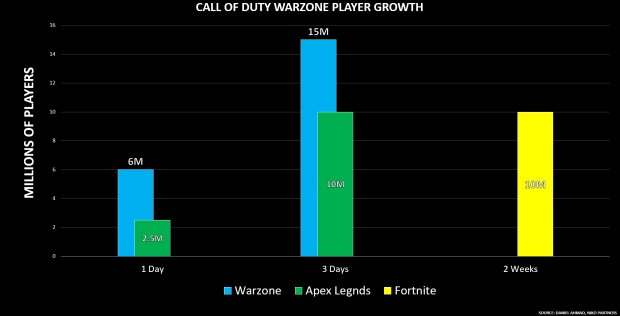 It took Fortnite 2 weeks to get up to 10 million players. And it took PUBG roughly 7 months to hit 15 million copies sold, but that's a buy-to-play premium game.

Here's the figures from Ahmad:

Number of Call of Duty Warzone players after:

Number of Apex Legends players after:

Number of Fortnite BR players after:

The figures send a clear message: Warzone is the biggest thing Activision has ever done and represents massive growth potential. The F2P accessibility alone is huge, but cross-play and cross-SKU (Warzone players can play against Modern Warfare owners) add even more explosiveness to the winning combo. Warzone is simultaneously an extension of Modern Warfare and a standalone moneymaking multiplayer game in its own right.

Warzone was specifically designed to keep you playing with as many people as possible, and to monetize you in the long run with battle passes and cosmetic microtransactions. In short, Warzone is the new magic formula: A split yet unified game system that perfectly taps online-driven engagement.

Activision is committed to Warzone for the long haul and we'll see the mode evolve over the coming months with new modes, weapons, characters, and a lot more. We can only imagine how much cash the publisher has raked in so far, but we're betting its Q1 2020 revenues will be pretty substantial because of Warzone, Modern Warfare premium sales, and of course Call of Duty Mobile.