Call of Duty: Warzone released yesterday, and since its debut players have flocked to the new battle royale shooter.

According to the official Call of Duty Twitter account, the new game mode has already amassed a staggering 6 million+ players just within its first 24 hours of being live. That number is definitely still growing as more and more players finish their downloads. Speaking of downloads, if you have already begun playing Warzone, then you know there is a hefty download of anywhere between 18-22GB, depending on the platform you are downloading on.

So, if there are already 6 million players playing Warzone, that means that 6 million players have downloaded a minimum of 18GB each, which equates to 108,000,000GB, or more accurately - 108 petabytes. That is a ridiculous amount of data that has been downloaded from Activision's servers in just 24 hours. It should also be noted that 108 petabytes is the minimum that has been downloaded as different platforms have a different required download totals. So, the true number is much higher and likely exceeds 150 petabytes of data in 24 hours.

Another thing to remember about the total data downloaded is that some players who are now playing Warzone didn't previously have Call of Duty: Modern Warfare installed. This means the download for these players would have been anywhere between 83-102GB, which means more GB and potentially petabytes tacked onto that minimum of 108 petabytes. 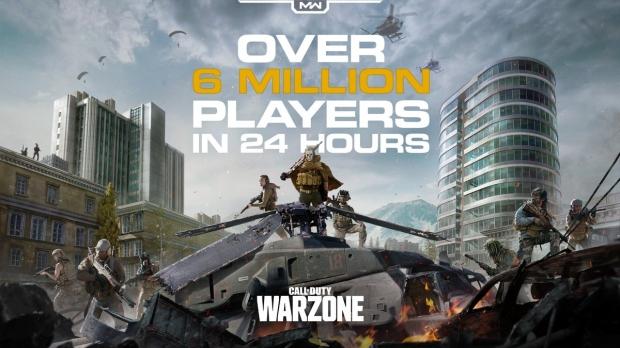