I'm sure most people would understand the pleasure of laying down with a tub of Ben & Jerry's and watching Netflix. So, how about an ice cream specifically for that?

Netflix has teamed up with Ben & Jerry's to bring out the first Netflix original ice cream - Netflix & Chill'd. The new brand of ice cream is a combination of Peanut Butter, sweet and salty pretzel swirls and fudge brownies. The mixture sounds like basically everything you need for a big Netflix binge.

On the official website, the company says, "We've teamed up with Netflix to churn up something extra special. And just like Netflix, there's something in this pint for everyone." At the moment it neither Netflix or Ben & Jerry's have announced how much the new ice cream will cost, but we do know it will be available in select grocery stores and also in a dairy-free variant. 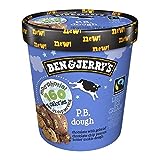