An American man has made a strange filing in an Iowa court, asking his new ex-wife and attorney to meet him on the field of battle. 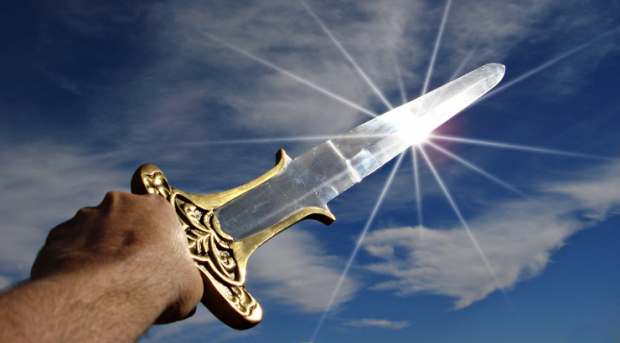 The Kansas man is 40-year-old David Ostrom, who says that his now ex-wife, Bridgette Ostrom, has "destroyed (him) legally". So in response to being "destroyed legally", Ostrom has asked the court to grant him 'trial by combat' and to give him twelve weeks to prepare his weapons for battle. Ostrom wants to forge his own kata and wakizashi swords for the trial. According to the Des Moines Register, the court states, "To this day, trial by combat has never been explicitly banned or restricted as a right in these United States".

Ostrom's main target in this trial by combat is not his ex-wife but instead her attorney, Matthew Hudson. Ostrom says, "I think I've met Mr. Hudson's absurdity with my own absurdity." Ostrom even suggested to his ex-wife to choose Hudson as her "champion". In response to the trial by combat request, Hudson has filed a motion to suspend Ostrom's visitation rights to his children and has asked to court to enforce a psychological evaluation on Ostrom.

Hudson said, "Although (Ostrom) and potential combatants do have souls to be rended, they respectfully request that the court not order this done. It should be noted that just because the U.S. and Iowa constitutions do not specifically prohibit battling another person with a deadly katana sword, it does prohibit a court sitting in equity from ordering same."

Ostrom did say that the battle doesn't have to end in death, and instead, the loser can "cry craven" and forfeit the fight. Ostrom said, "Respondent and counsel have proven themselves to be cravens by refusing to answer the call to battle, thus they should lose this motion by default. If Mr. Hudson is willing to do it, I will meet him. I don't think he has the guts to do it."