Nintendo has finally announced what every Super Smash Bros. Ultimate player has been wondering - "when is the next DLC fighter going to be revealed?"

The news has come from the official Nintendo Versus Twitter account, which states that Super Smash Bros. Ultimate director Masahiro Sakurai will be taking the helm once again for an in-depth look at the new fighter. The live stream will clock in at about 35 minutes long, and throughout the stream, Sakurai will delve into the new character's move set, abilities, advantages, disadvantages, and what players can overall expect from the new fighter.

So who is the 5th DLC fighter? Well, no one officially knows, but rumors and speculation are now pointing towards Dante from the Devil May Cry series. The speculation behind Dante is because Devil May Cry 3 is releasing on the Nintendo Switch soon and that the Devil May Cry Twitter account Tweeted out to fans to "mark these dates on your calender's January 16". January 16 is the same date as the DLC fighter reveal. So it would kind of make sense? Either way, we will just have to wait patiently before confirming anything. Who do you hope makes it into Smash Ultimate?

Tune into the live stream on January 16th at 6 AM PT. 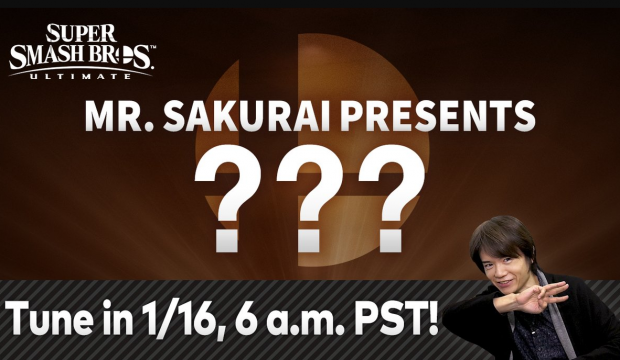