The bushfires that are currently sweeping across Australia have ravaged not only people's homes but many square miles of wildlife. Infinity Ward has recognized this and is going to be donating 100% of the proceeds of a DLC pack to the countries recovery.

In a new Twitter post on the official Infinity Ward Twitter account, the studio announced that as a part of their efforts to support the rebuilding of what the bushfires caused they will be "donating 100% of Activision's net proceeds from each purchase of the "Outback" pack." In the Twitter post, they detail that they have renamed the pack to the "Outback Relief Pack" and that until January 31st, all purchases from all platforms will be donated.

For those who have already purchased the pack, Activision has said that your purchases will be counted as a donation. So how much is the "Outback Relief Pack"? Activision has priced the pack at 1,8000 CoD points, which equates to about $20. The pack includes new skins such as the Bushranger operator skin, a koala charm, and some other cool little cosmetics. Please support the bushfires in Australia. They have caused terrible damage to not only people and their lives but also the land. Every little bit helps. 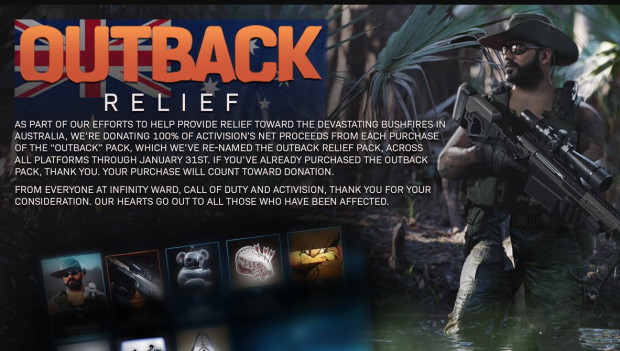