ShankMods has done it again. First he made a Wii out of an Altoids tin, then a portable handled Wii with GameCube buttons. Now the modder has fabricated custom GameCube JoyCons that slide right onto the Switch's rails.

The Switch has so much untapped potential for interchangable retro JoyCons. Cut a controller in half, slap some rails on it and voila, the Switch is a time machine for old-school games. The biggest variant everyone wants to see is actual GameCube JoyCons. If Nintendo won't do it, modders will.

By adding attachable GameCube controllers to the Switch's sides, renowned tinkerer ShankMods has pieced together a fantastic Frankenstein gaming creation that merges past with present. The result is a fully-functioning GameCube-JoyCon hybrid that plays like an old-school controller with new-school tech like HD Rumble, gyroscopic tracking, and Amiibo support. 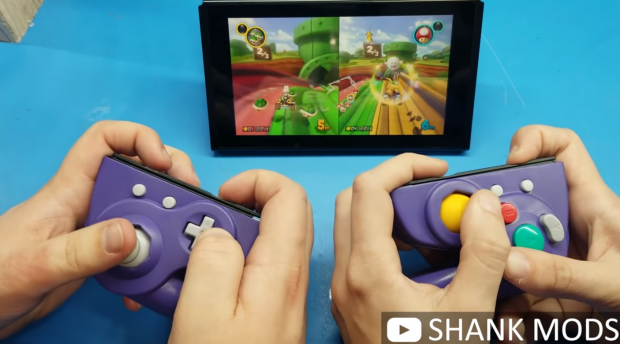 The controller also mimics every JoyCon form factor, whether it be equipped to the sides for Handheld Mode, hooked up to a custom joining piece for Docked Mode, or via two-player action in Tabletop Mode.

The creation is an amalgamation of different platforms and parts: it sports GameCube buttons and chassis, Switch Pro actuators and analog sticks, Switch JoyCon PCBs/wires, and a lot of custom 3D printed pieces. The modder put up a 14-minute video chronicling the device's arduous development and perhaps shows why Nintendo is in no hurry to make these kinds of elaborate JoyCons.

Shank used the bigger GameCube WaveBird wireless controller for the build for the extra space needed for the internal batteries and other components. In the end the controller housings were a snake's nest of wires. 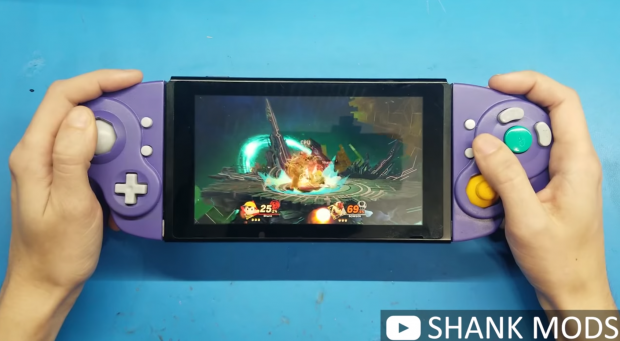 Truth be told the controllers took a lot of work from Shank, namely with the JoyCon wiring, which is confusing and very unique.

"JoyCons are wack. It took several days of troubleshooting and soldering under a microscope, but I was finally able to figure out how it all worked. It required some fairly difficult soldering points, including transistor pads and fine-pitch ribbon cable connector pins. This is not a project I'd recommend for beginners."

The build was also the result of numerous people chipping in, including controller specialist Bassline25, who carved a custom second Z button into the left JoyCon.