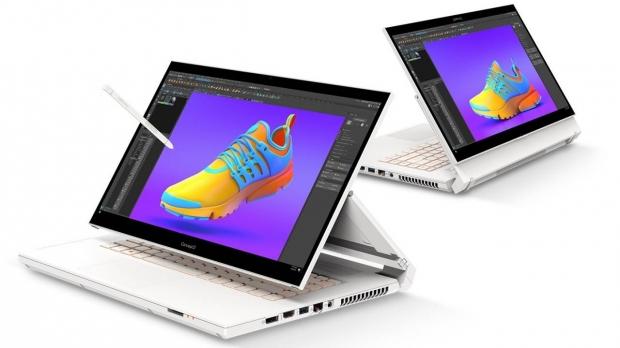 But where the Acer ConceptD 7 Ezel does things differently is in the new hinges, allowing the laptop to have an almost 360-degree swing. This means you can throw down the Acer ConceptD 7 Ezel pretty much anywhere and get work done, show someone something, or use it as a portable display -- all while it packs some crazy internals for high-end tasks.

Inside, Acer can configure the ConceptD 7 Ezel laptops with NVIDIA's normal GeForce RTX 2060 or RTX 2080 Ti -- while the Pro model can be configured with the latest Quadro RTX graphics cards. You can also opt between Intel's new 10th-gen Comet Lake CPUs or a higher-end workstation Intel Xeon CPU in the Acer ConceptD 7 Ezel Pro.

Acer ConceptD 7 Ezel laptops have a Wacom EMR pen built into a slot on the bottom right of the hinge, making it into a Surface-like competitor. Acer uses a 15.6-inch Pantone-validated 4K touchscreen, while the quiet fans inside of the laptop will keep the Acer ConceptD 7 Ezel running at less than 40dB.