For those who do not know, QLC NAND or Quad Level Cell NAND has been the bridge to bringing a truly value option to high-speed storage. QLC has been introduced in everything from Samsung QVO to Intel's 660P offerings, among various others. QLC allows for more bits per cell, therefore, increasing overall density for a NAND package. This did, however, come with some caveats such as reduced endurance. 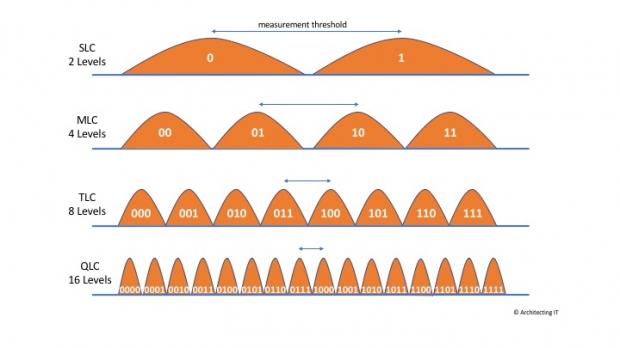 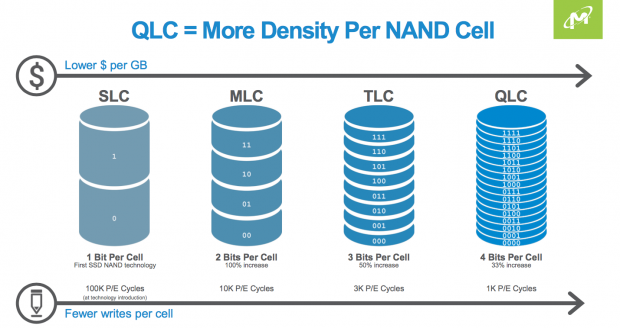 I don't want to dive into everything that has to do with QLC and how it works as that's a deep-dive topic and not what we are talking about today, but I will try to cover it in the following few sentences briefly. So, with that said, SLC or single-level cell was the first NAND tech that was released with the introduction of SSDs.

These SLC parts stored a single bit of information, which in turn allowed for two states, one and zero. Next up was MLC, which doubled the available capacity per cell with four states possible but at the cost of potential performance. Next after that was TLC, which once again doubled up things for up to 8 states with three bits per cell.

And now, we have what is in front of us today, which is QLC, and it offers 16 states with four bits per cell. This, as I said, is a much more involved topic, but its a high-level explanation of the difference as NAND technology has come along. One thing worth noting is that as the charts above from Micron show is that each iterative generation of NAND has also incurred a reduced endurance rating. This is due to storing so much more data per cell and the associated P/E cycles reduction, which is the number of times a cell can be written before its no longer reliable or usable. 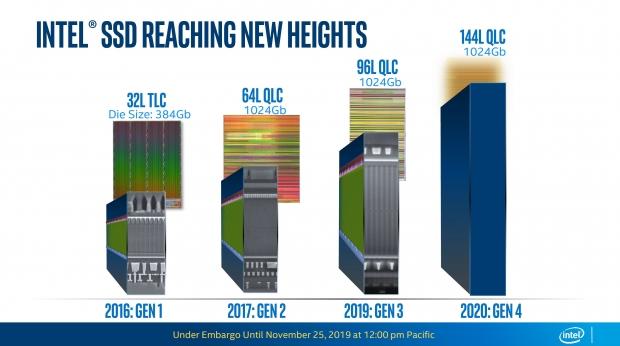 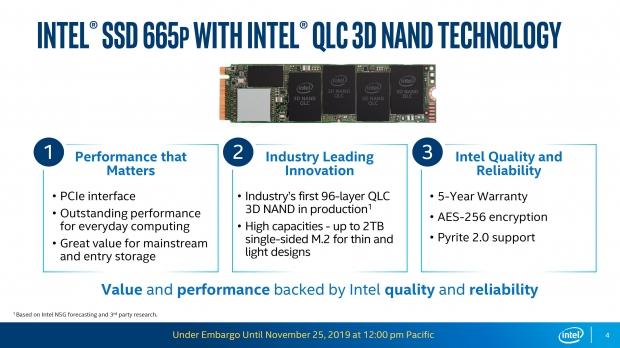 Intel has announced today their new 96-layer Gen 3 QLC an industry first. Not only that, but their cadence will follow to have 144-layer QLC coming in 2020 with their Gen 4 QLC. The new NAND will be deployed on the latest Intel 665P, which is a refresh of the 660P for all intents and purposes but with the new 96-layer NAND. 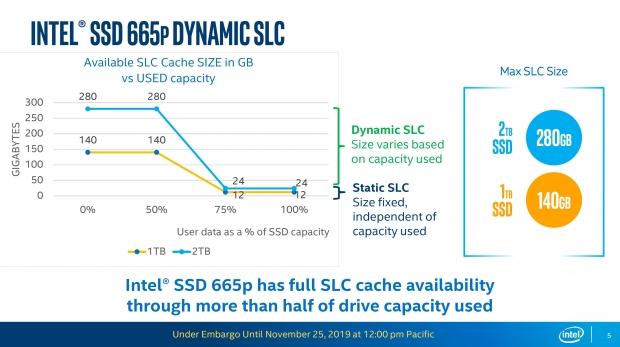 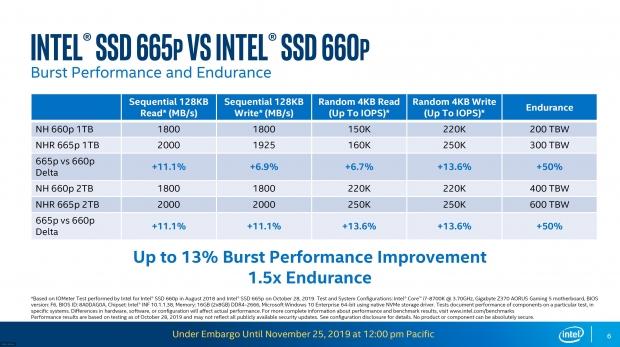 Another area that has been a point of concern for potential QLC adoption is that once you fill the cache, the drive performance can have a massive fall off. This is alongside the reduction in performance discussed previously. Intel has attempted to combat the performance drop off by employing what they call dynamic SLC cache.

This means that up to 50% capacity fill, the 665P will have a much higher SLC cache available (280GB for the 2TB model and 140GB for the 1TB model). However, this falls off in a significant way once you pass the 50% drive fill threshold. To some, that sends massive red flags waving, but depending upon the use case, that may not be as big of a deal as you might think.

On top of this, Intel claims that the endurance for their new 96-layer QLC on the 665P to be 1.5X higher or 50% more to offer a bit more peace of mind if the drive may be heavily used. Intel also somehow pulled a boost in performance, which will be welcome to those in the value segment. 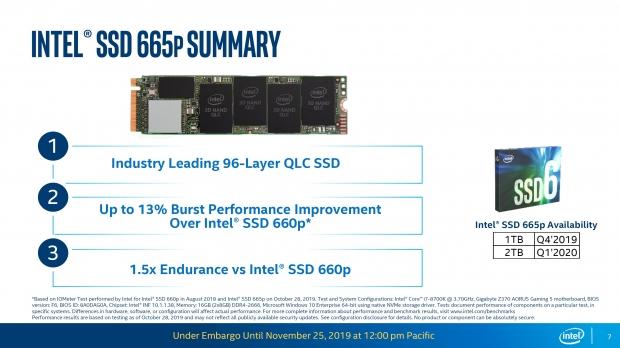 So as far as a high-level overview goes, Intel is pulling some delightful rabbits out of their hat with the new 96-layer flash, but many may be asking, what is the proper use case for a drive like this? Well, I think the QLC based drives, if not used in write-intensive scenarios you may never even breach the cache barrier resulting in a performance dropoff as we discussed previously.

The ideal solution for the 665P at least, in my opinion, is as a replacement for the old spinner game drive where most data transactions will be read-intensive as game files are pulled up but much less often needing to write data. With a higher endurance, more capacity (2TB single-sided), the QLC drives from Intel, such as the 665P, could be a reliable option, but we will have to wait until we get hands-on with a unit to put it through its paces. 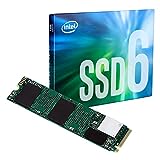