The third episode of Rick and Morty Season 4 has aired, and while it might 'steal' your attention, for the time being, don't get excited about next week's episode because it's not happening.

Comic Book has confirmed that Rick and Morty Season 4 will be going on a two-week break starting from now and will return with the fourth episode after this period. Comic Book says this news was confirmed through a new promo for the next episode, which can be seen above.

The reasoning for this hiatus from the fourth episode is most likely due to Thanksgiving being this weekend. So just to be clear, Rick and Morty Season 4 Episode 4 will NOT be aired on Sunday, December 1st, and instead return back to viewers on Sunday, December 8th. For those wondering how many episodes are in Season 4 as a whole, Adult Swim will be gifting us with 10 glorious episodes in two batches. 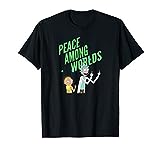