Imagine if ships could be made unsinkable, it seems like a pipe dream of some sort because everyone knows that metal sinks quite quickly once submerged.

Scientists from the University of Rochester have been working on a solution to this problem, and from the above video, it seems they have come up with quite a great idea. The researchers have created a metal that repels against water by having pockets of air under it keeping it afloat. The researchers have done this by etching into the surface of the metal special patterns which were inspired by the natural world.

The team explains that some spiders and fire ants are hydrophobic, meaning that they repel against water. So, the researchers took this insight and created an etching technique called "superhydrophobic" and applied it to modern-day metals. The results could be revolutionary as described in the paper, "The key insight is that multifaceted superhydrophobic (SH) surfaces can trap a large air volume, which points towards the possibility of using SH surfaces to create buoyant devices."

In theory and using the above video for reference, if this technique is perfected and mass-produced, we could have unsinkable ships and boats. The video demonstrates that even if the metal is damaged, it still manages to keep its buoyancy. Proving that if something tragic happened on a ship that caused it damage, it would still be able to float despite fatal holes. 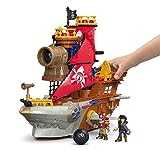