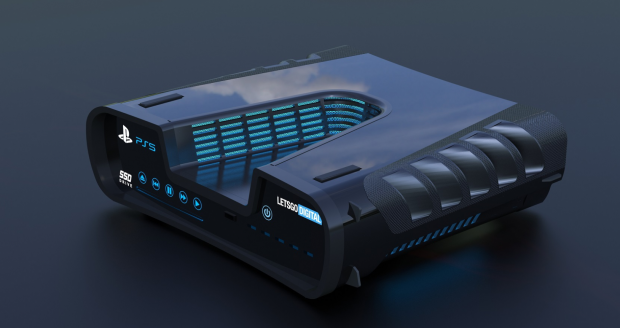 "Today I'm proud to share that our next-generation console will be called PlayStation 5, and we'll be launching in time for Holiday 2020," Sony Interactive President Jim Ryan today announced. Microsoft's next-generation Xbox console, codenamed Project Scarlett, will likewise release holiday 2020. The console wars are far from over.

According to inside sources, the PS5 is a true generational leap ahead of current console tech. The system leverages AMD's new potent Zen 2 CPU and Navi GPU tech to deliver up to 120FPS, 8K graphics, dedicated ray-tracing lighting,and is outfitted with a potent PCIe 4.0 SSD to massively accelerate gameplay. Rumor has it the PS5's GPU is nearly as fast as an NVIDIA GeForce GTX 2080 GPU to deliver high-end 4K gaming and 1080p with higher FPS.

The PS5's devkit also features a radical V-shaped ventilation design, likely so that developers can stress test it and push it way beyond its limits. Sony has obviously yet to confirm the console's final design, and devkits often look different than actual retail builds, but it's still a good sign that Sony is taking its next-gen system very seriously.

Sony is expected to reveal the PS5 in a special event in February 2020.