Star Citizen is a money-printing machine that's always releasing massively expensive ships, and the latest costs $675 (it's not even the most expensive either). 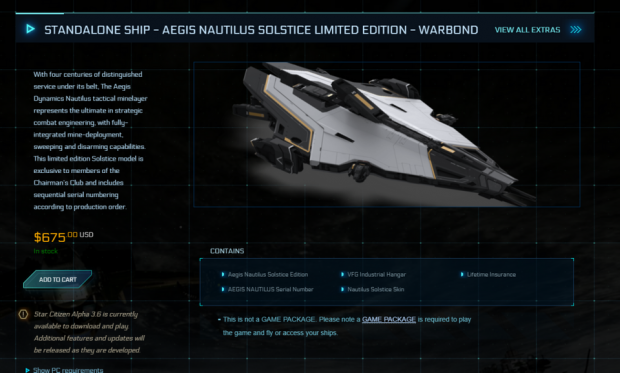 Star Citizen, the game that may never be completed, recently revealed a new $675 ship called the Aegis Nautilus, a large-sized Squadron 42 military ship that lays two types of mines (sentry and homing mines). The Aegis Nautilus also sports dual S7 guns. Gamers affirm this is a niche ship, and many criticize Roberts Space Industries for not making more progress on the game's promised features including the big Squadron 42 singelplayer mode.

This is actually quite normal for the game and it routinely releases ships that cost as much as $1,200 a piece. Star Citizen even has a pack that costs $27,000--you can either buy a bunch of ships or a brand new car.

It gets more costly, too. The Aegis Nautilus was revealed during a special VIP event that charged $275 per ticket. Buying a ticket to an event that revealed a $675 ship for an unfinished game...ouch.