Elon Musk must've tipped a few back over the weekend as the SpaceX founder and CEO teased the idea of nuking Mars again... but this time, he has t-shirts. Musk took to Twitter over the weekend with a simple tweet:

Better yet, the official Twitter account for DOOM tweets out that they want Musk to use their BFG 10000: 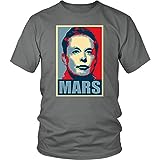