Origin PC celebrates its 10th anniversary by doing what it does best: making insane mind-blowing builds. 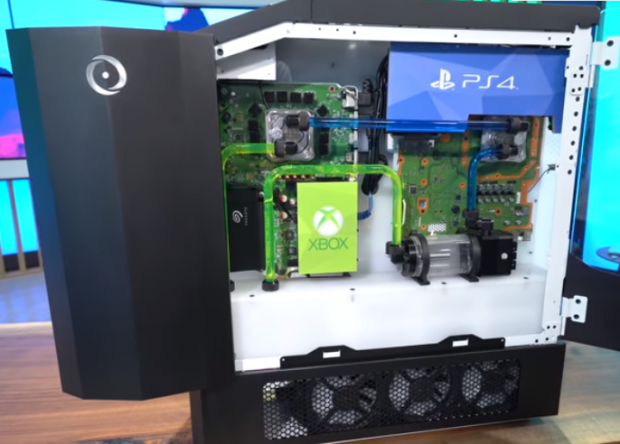 While at Intel's IEM event in Chicago I met Bryan Ore from Origin, who showed me a video of something I didn't believe was possible: a custom build that rocked every gaming platform. Origin PC's new Big O 2.0 is something out of science fiction: it fuses a PS4 Pro, Xbox One X, Switch, and a high-end NVIDIA RTX Titan-powered PC seamlessly into the case--all with water cooling, custom color-coding, and an intricately-designed layout. It even has a custom slot to dock the Switch.

The all-in-one Big O 2.0 is basically a gamer's dream and offers the best of all worlds. You can experience PS4 exclusives, Switch games like Smash Ultimate, play with your Xbox buddies, and blast out insane FPS in Overwatch all in the same place. But Ore was careful to say it'll never go on sale. Of course it won't--Microsoft, Sony and Nintendo would never allow it...but it's still fun to dream right?

The system is housed in Origin's Genesis case with maximum fan cooling and has built-in HDMI switches so you never actually need to change the TV/monitor's HDMI channel.

"This 2019 edition of the Big O combines the Xbox One X, a PS4 Pro, a Nintendo Switch and a high-end gaming PC into our flagship Genesis desktop chassis. The Big O is a testament to a hard work and creativity when it comes to PC building," Origin said.