VESA has just announced the fresh new DisplayPort 2.0 standard that drives supported resolutions right up to 16K, which comes in at an eye-weltering 15360x8460, and DP 2.0 can do it at 60Hz.

DisplayPort 2.0 can also do dual 8K monitors both at 120Hz which is astounding, considering DP 1.4-based 8K monitors use dual DP cables to hit 8K60. This is the first update to the DisplayPort spec since 2016 with DP 1.4a, which compared to that DP 2.0 has 3x more bandwidth which is the driving force behind the huge uptick in resolution support. VESA Board Chair Alan Kobayashi explains: "DP 2.0 represents one of our most significant milestones in the history of DisplayPort, and is the culmination of several years' effort and major enhancements to this ubiquitous standard".

DP 2.0 supports multiple high-res, high refresh rate displays with the increased bandwidth allowing for 2 x 8K 120Hz monitors, or 2 x 4K 144Hz monitors which is just incredible. Not only that but we'll have support for 10K monitors as well. This is all thanks to that increased bandwidth that the new DP 2.0 standard is capable of, speaking of which here are the raw bandwidth and effective bandwidth numbers: 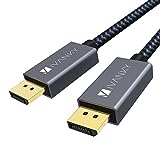