Originally set for a Spring 2019 release, Friday the 13th's brings blood and guts to the Switch this August. 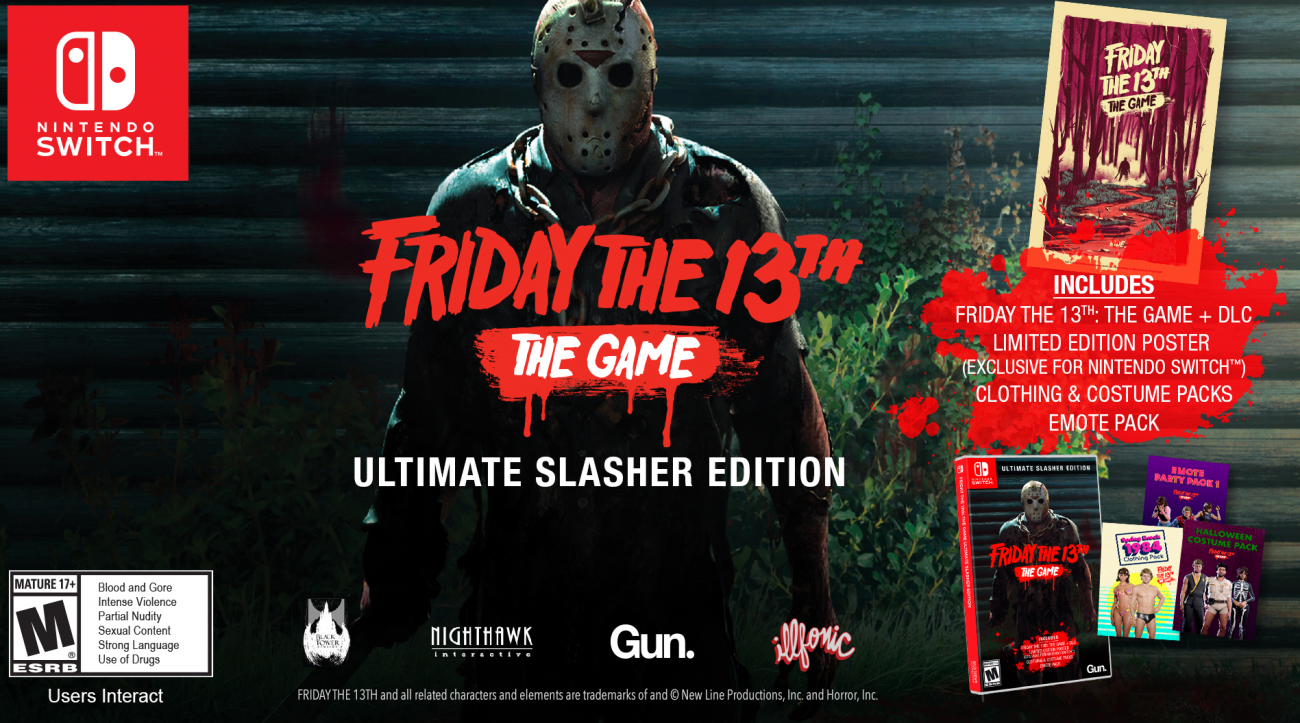 I'm still quite surprised Friday the 13th: The Game is coming to the Switch. The game pits eight players in a cat-and-mouse chase of predator and prey, one player controlling Jason while the others scramble around trying to outsmart the supernatural slayer. It's such a superviolent and visceral game full of brutal death scenes and horrifying thrills, and its arrival on the Switch shows just how much Nintendo's hybrid system has grown up.

The Friday the 13th: The Game Ultimate Slasher Edition Switch port is being handled by Nighthawk Interactive and comes with all post-release DLC and content released on previous platforms. The horror-fest will be available in a $40 retail version, and all of the content is neatly packed right onto the cartridge. Extras include a nifty poster and some emote and costume packs.

The only gameplay footage we've seen is a 360p resolution video stream, and we don't know exactly how the game will run on the Switch's lower-end hardware.

The downside to Friday the 13th: The Game is that it's completely static and won't expand with future updates. Back in 2018 the studio was forced to halt development of all future content, packs, and skins, thanks to a lawsuit.

Jason will slash onto the Nintendo Switch on August 13, 2019. Check below for more information:

Friday the 13th: The Game Ultimate Slasher Edition for the Nintendo Switch includes:

Eight-Person Multiplayer and Single Player Modes - On maps spanning multiple iconic locations from the movie franchise, players will match up online as either Jason Voorhees or a Camp Counselor trying to survive the night. Players seeking lower pressure slasher fun can take the fight offline in matches with AI bots.

Killer Variety - Players can don the mask of their favorite incarnations of Jason Voorhees as depicted in films two through nine. Each Jason is hand-crafted with specific strengths, weaknesses, and exclusive brutal kills. The retail edition offers even more brutal execution options, with the Pick Axe, Pig Splitter and Machete Kill Packs.

Character Customization - As players level up, they will unlock new playable Counselor and Jason models that can be purchased with Customization Points (CPs). CPs also unlock new kills for Jason, game-changing perks that help Camp Counselors survive the night, emotes for self-expression, and various regalia appropriate for a funeral ... or seven. The retail edition includes the Spring Break '84 Clothing and Halloween Costume Packs for players to try on before the murder party.