Borderlands 3 is bringing some welcomed changes to loot and co-op, and introducing some absolutely bonkers guns. 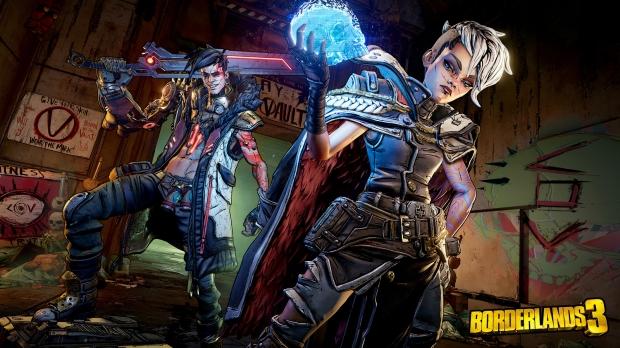 Wither Borderlands 3, Gearbox wants to go all out. Not only is the game absolutely massive with 1 billion guns, off-planet travel, full synergy with AMD's latest PC hardware, and four new vault hunters with unique customizable skills, but it'll change how gamers play co-op in a few key ways.

Gearbox confirms Borderlands 3 will have couch co-op with two loot drop modes: the classic Diablo-style shared drops where anyone can pick up anything like in Borderlands 2, or a new mode that has loot instanced and separated to each individual player. Both modes can be activated online or in couch co-op sessions.

"One of the things that I'm most excited about in Borderlands 3 are the improvements that we've made to co-op. Regardless of your respective levels or mission progress, you and your friends can play together online or on the couch, and not only will each of you deal a meaningful amount of damage, you'll also receive your own discrete loot stream," Gearbox's art director Scott Kester said in a recent PlayStation Blog update.

"No more loot ninjas! Of course, if you prefer to play with classic Borderlands 2 co-op rules-where loot is shared-you can choose to do so."

Gearbox also confirmed some interesting details about Borderlands 3's guns. Apparently the game will have special badass firearms that shoot volcanoes, and weapons even have hybrid elemental attacks for guaranteed chaos. And there's even guns with legs that will shout coarse language at your foes like a demented Claptrap.

"Looking for something a little crazier? Okay, how about rifles that spawn fire-spewing volcanoes, or guns that grow legs and then chase down enemies while verbally abusing them? We've got those too," Kester said.

Borderlands 3 looks pretty wicked so far. But PC gamers are still quite upset about the game's six-month timed exclusivity on the Epic Store and aren't so easy to get hyped about the sequel.