CES 2019 - We've seen a 1TB SD card teased before by SanDisk a few years ago now, but Lexar has stepped up to the plate and unleashed a new 1TB SD card. 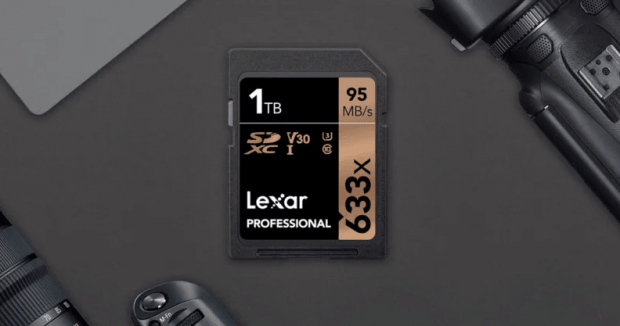 Lexar's Professional 633x family of SDHC and SDXC UHS-I cards are now available from 16GB through to 1TB, where until now it was 16GB to 512GB. The new 1TB version has claimed read speeds of 95MB/sec while write speeds are 70MB/sec. The card itself is rated at V30/U3 which is good for 30MB/sec of sustained write performance.

Right now the 1TB SD card will cost $499.99 but B&H has it on special for $399 right now, a savings of $100. Remember that two 512GB SD cards will cost less than $150, so you're paying a serious premium for 1TB of storage on a single SD card. For professionals where money isn't a problem I can see this being popular, but someone has to do it first - it's not like Lexar will sell tens of millions of units, and before it does we'll see 2TB and then 4TB SD cards become a reality.

Still, it's crazy to see a commercially available 1TB SD card, and from Lexar. Kick ass!