We're not very far in Assassin's Creed: Odyssey, but we've picked up a thing or two on our adventures across ancient Greece. Here are a few tips and tricks that you can use to help you in your mythical trek across the Aegean. 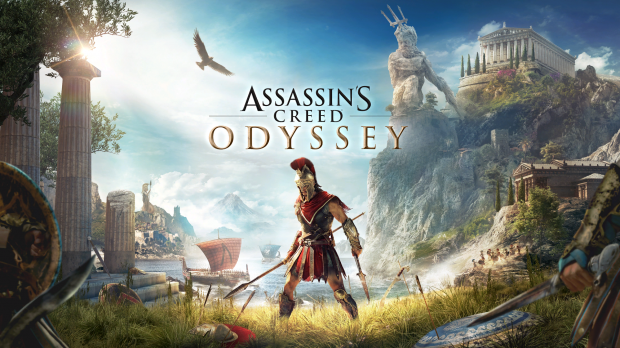 When I first started Assassin's Creed: Odyssey I was very worried it'd turn into a grind-fest with rote RNG gear-hunting, questing, and other menial tasks. I'm happy to report I was quite wrong. Odyssey is perhaps the best Assassin's Creed I've played to date (I like it a smidge more than Origins, which has a close place in my heart) for a number of reasons. But one of the strongest examples of Ubisoft's excellence comes down to the little things Odyssey offers--small things you learn by experimenting and making mistakes.

Here are a few things we've learned in Odyssey:

Now without further ado let's check out some of the lessons we've learned--many of which were learned the hard way. 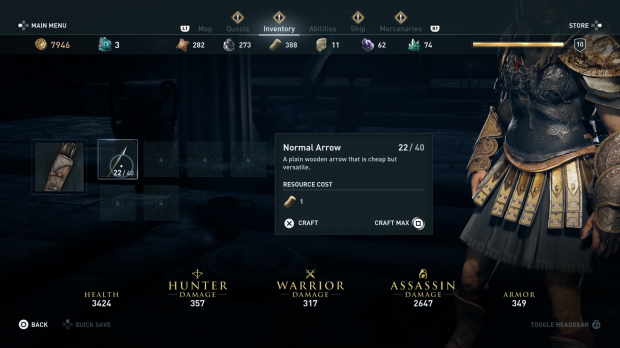 You can craft arrows

I found out about this days after I started and it's a bit embarrassing. You can craft your own arrows by navigating to the quiver pane on the inventory screen. Crafting arrows takes wood, so be sure to buy some or stock up by collecting some olive branches. 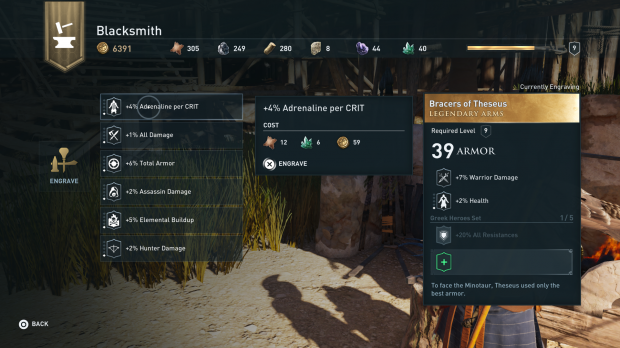 Engraving is a great way to add some boosts to your build. Visit a blacksmith and spend resources to add nifty perks and bonuses to your weapons and armor. The higher grade the item, the steeper the cost is all around, so don't be afraid to enhance normal items instead of rare, epic or legendary pieces. You can always swap them out on-the-fly.

Odyssey likes to dole out normal weapons and armor pieces quite often so use this to your advantage. Engraving normal gear only costs soft leather, some iron, and a few drachmae.

Another good idea is to consult the mercenaries page and have backup weapons and armor that attack or defend specific merc weaknesses and strengths. 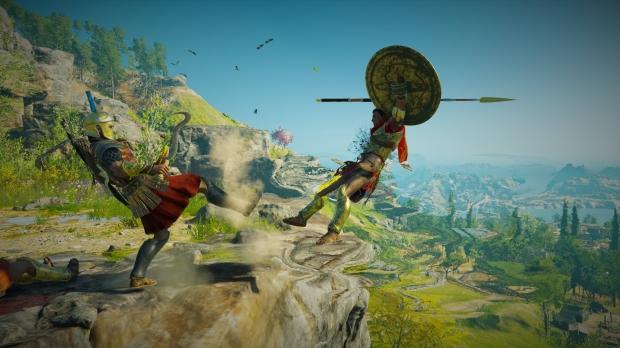 Having trouble with a particular mini-boss or mercenary? Lead them up to high ground and position yourself at the edge. Then simply roll away so they're against the edge and spartan kick them off the high ground. Fall damage is an amazing ally and will dispose of many enemies!

I've actually killed multiple mercenaries in this way, and it was how I survived a battle with three mercs at once: Phyllis Iron-Eater, Hyrkanos the Cunning, and Persephone the Flash (who has a fearsome jaguar ally). I was able to take out Hyrkanos with a spartan kick off the edge of a temple, then I did the same to Phyllis. But Persephone and her cat friend were just too high of a level (they were level 22 against me, a level 8) so I had to run away.

This has saved me soooo many times. Making tactical use of your abilities is essential to survival in Odyssey, and some enemies dish out serious damage with power attacks. But you have an edge: your mighty calves.

When an enemy starts blinking red, simply use your Spartan kick to interrupt their attack and send them flying. You need to time this just right--kick them before they actually connect the blow--for it to work. 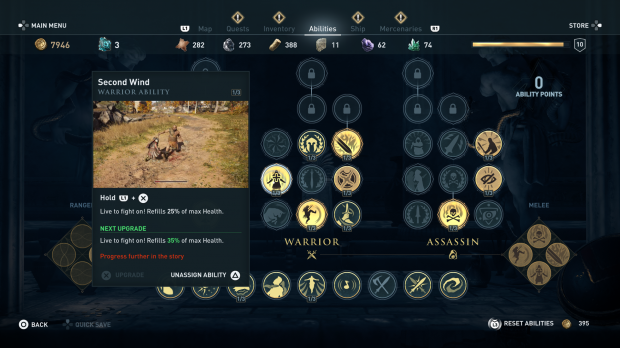 Get the health restore ability ASAP

Refilling your health while in battle is incredibly advantageous, especially when you're battling a merc for 10 minutes straight. It's imperative you grab the Second Wind skill as soon as possible so you can not only survive, but learn to chain attacks and refill your adrenaline properly. More on this below. 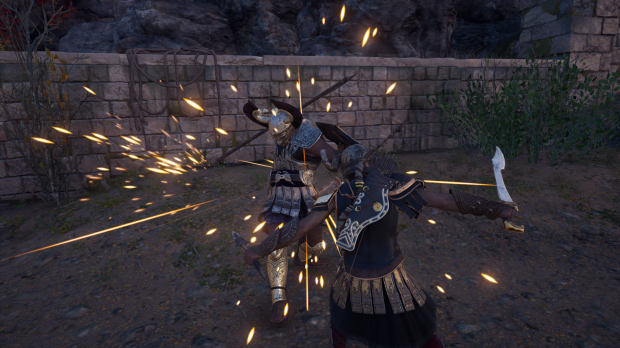 Adrenaline is your lifeline to survival

Adrenaline is basically your mana source used to cast your abilities. Run out of adrenaline and you can't use Spartan kick, health refill, poison/fire weapon abilities, or any other major skills. Each ability has its own cool down so it's important to be cognizant of this in battle.

You can refill your adrenaline in a variety of ways: landing a critical blow/headshot with a bow and successfully parrying an attack are key ways to do this. You can also engrave your gear with buffs to boost adrenaline gain per strike.

Your major DPS source will be fire/poison strikes with quicker weapons like daggers, spears, or swords. Heavy-bladed weapons cast a wide swath and have more reach, so those are good for crowd control. Clubs also stagger opponents more often and dish out more damage, but are slow. Faster blades are great for accumulating damage, especially elemental attacks.

It's really that simple. Throw in a Spartan kick when enemies trigger power moves and you can simply rinse and repeat.

A few headshots with a bow don't hurt, either. 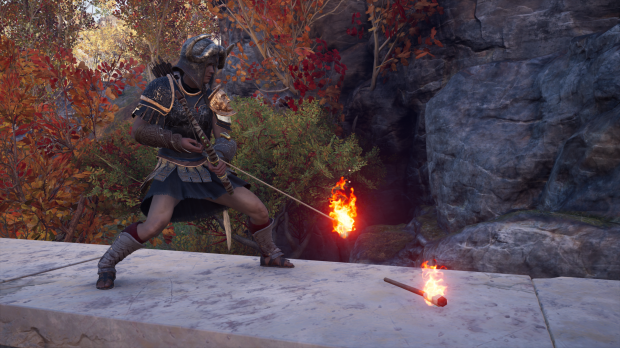 You can actually make fire arrows wherever you are. Simply drop your torch when equipped by pressing R2, crouch down, pull out your bow, and ignite your arrows. Voila! Soften up a boss, mercenary, or a captain/polemarch with the help of flames.

You can also ignite arrows on braziers by standing close to them. Can't afford to stop moving? Simply shoot arrows through the flames to inflict elemental damage to your foes. 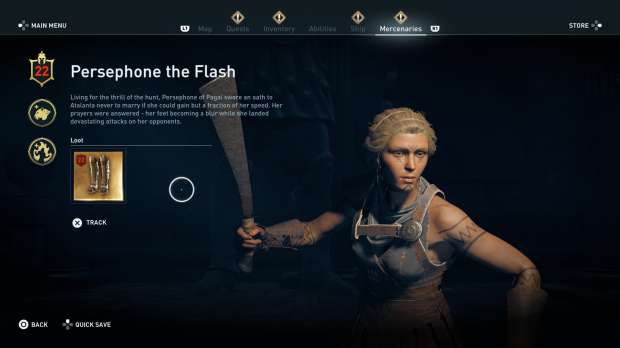 Don't be afraid of mercenaries--kill them whenever possible

The new mercenary system is one of my favorite additions. It's kind of like a lite version of Shadow of War's Nemesis system. The more enemies you murder or crimes you commit, the higher your wanted level raises. Wreak too much havoc and mercs will be sent in to hunt you down. You can clean your wanted level by paying bribes or killing sponsors...but I never do this.

Killing mercs is one of the best ways to get new gear. Some mercs even have legendary tier items, but mostly its blues or purples.

Fighting mercs also keeps you on your toes. I've had two or three mercs come out of nowhere while I'm fighting scores of Athenian soldiers, making the skirmish into a thrilling boss battle for survival.

Don't shy away from mercs: not only will you get good XP, materials, and items, but you'll have a fun time doing it. Taking on a higher level merc makes Odyssey into a kind of Dark Souls battle to the death...but sometimes you may have to run. To even things up be sure to check each merc's weaknesses and strengths and adapt accordingly.

If all else fails, just Spartan kick them off of a high ledge. It works every time!

The more you use a weapon the more engravings you unlock. Every weapon has a tiered kill count--kill 50 enemies with a spear and you'll unlock a new engraving recipe to boost spear damage. Mix and match what weapons you use based on personal tastes and utility (we'll go into more detail on the weapons below).

A good way to practice this progression is to simply attack nearby predators and other animals as you explore. I don't condone the wanton murder of goats, but in this case it's for a good cause, right? Don't run away from any predator attacks either. Use every instance as an opportunity for growth both in XP and engraving potency. 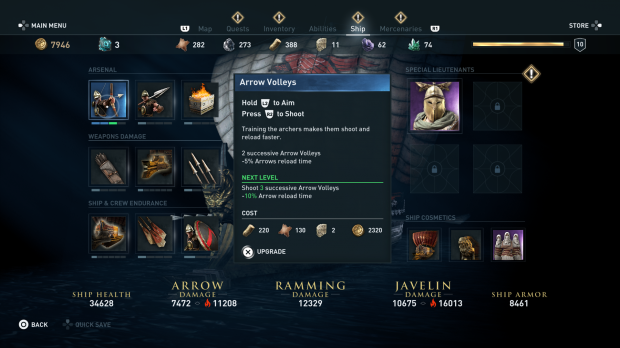 Upgrading any part of your ship instantly refills its hull health

While on my way to the Oracle of Delphi I was bombarded by a bunch of ships. A mercenary-led cruiser and two other smaller ships attacked me. About halfway through the ship battle, another mercenary came wading in. Then another.

Things got rough really fast. After taking out most of the ships, I was able to cruise away from the third merc and make some modifications to my ship. Normally this upgrade menu is locked off if you're in battle but I was far enough way to upgrade to fire arrows.

That upgrade instantly refilled my ships HP, and good thing too because I was almost dead. Freshly armed with fiery arrows of doom and a new hull I dispatched the merc and sailed onward. 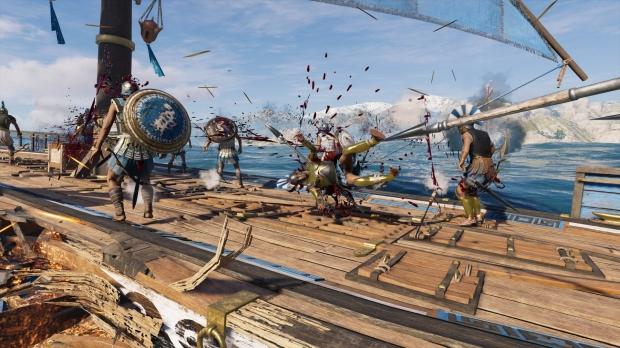 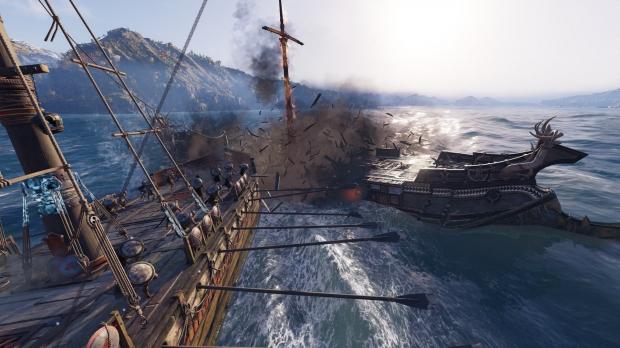 Remember that we've just started our quest so we'll probably have lots more tips to offer in the coming days. But for now I just wanted to share some of the more interesting things I noticed during my sessions in Odyssey. My journey has just begun and I look forward to experimenting with more abilities and environment interactions in the coming weeks.