Twitch and Amazon formulate yet another big subscription-engaging strategy by giving out a slew of free games every month. 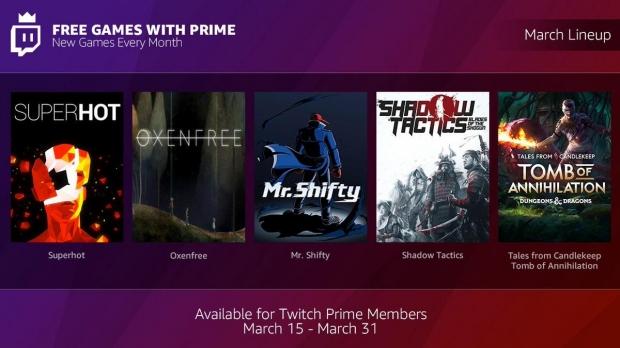 Following in the footsteps of its subscription competitors, Twitch Prime, which is included in Amazon Prime subscriptions, has now become more like PlayStation Plus and Xbox LIVE Gold by doling out a monthly allotment of free games. Sure these games will likely just be indie titles, but the streaming giant thrives on engagement and one of the main ways to entice new subscriptions and keep current subscribers is through freebies. The new initiative kicks off on March 15 and includes five indies, and is a major extension of the recent Indie Amplifier program.

The free games for March include:

We're celebrating the incredible community response to the Twitch Prime Indie Amplifier program and welcoming all of our new members with the introduction of Free Games with Prime, a brand new program that upgrades your membership by giving you a collection of free games every month starting this Thursday, March 15th.

We're digging into our archives to bring you the best of our previously released games, starting with a pair of critically acclaimed titles: Superhot and Oxenfree.

We're also happy to announce that all eight titles from the Indie Amplifier program will be made available for free over the next few months. First up are the winner, Shadow Tactics, and strategy-RPG Tales from Candlekeep: Tomb of Annihilation. The rest of the titles will be released in the following months, in no particular order.

Finally, the 2.5D beat 'em up Mr. Shifty will be available for Twitch Prime members for the first time this month.

That's five games, all available for FREE and yours to keep starting on March 15th!

And be sure to come back in April because our next Free Games with Prime.