Today is AMD day, with news of the Ryzen 7 2700X offering 8C/16T of CPU power at up to 4.35GHz for $369, as well as ASRock rumored to be entering the graphics card market as an AIB partner making AMD Radeon cards. 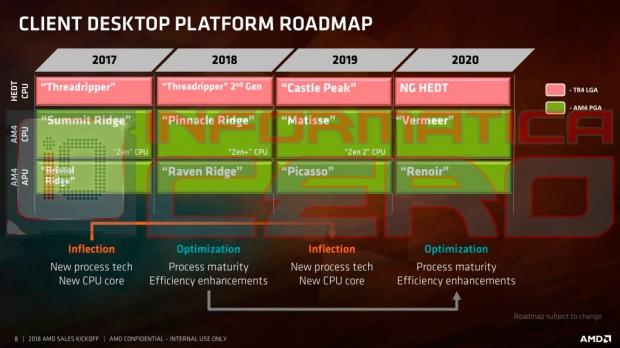 Now we have a leaked roadmap of AMD processors through to 2020, which covers this year and the releases of the next-gen Threadripper, upcoming Pinnacle Ridge, and the just-released Raven Ridge APUs.

Next year we can expect AMD's new Castle Peak CPU architecture, a new Ryzen range of processors built on the Matisse codename and exciting new Zen 2, while Picasso succeeds Raven Ridge on the APU side of things. But I think it is 2020 where the real excitement begins with a third-generation Threadripper, and new Vermeer CPU architecture that will succeed Matisse, and Renoir that will succeed Picasso.