In an attempt to save its beleaguered MOBA Battleborn, Gearbox has made a strange hybrid scheme that combines a free to play structure with microtransactions while retaining the $30 retail version.

With Battleborn, 2K Games has found a way to merge freemium-style microtransactions with actual retail sales. Battleborn now has a "free trial" mode that offers unlimited PVP play with 30 free heroes across four modes, with a rotating cast of heroes. To offset the free trial mode, Battleborn will have premium digital currency that is purchased with real money, which is redeemed form cosmetics, gear, EXP boosters and more. The full game will still be sold for $30 on PS4, Xbox One and PC, and upgrading to the full game unlocks all 25 characters, the full story mode campaign, and private matches. The free trial mode is now available on Steam, PS4, and Xbox One.

Existing Battleborn owners who purchased the game before today get access to the Founder's Bonus Content loot pack, which includes premium platinum currency, credits, exclusive titles and skins, loot packs, and more. Gearbox meticulously outlines all of the changes to Battleborn in this huge post, so give it a read if you're interested.

This move was a smart one on 2K Games' part, and the company's parent, Take-Two Interactive, is no stranger to microtransaction-based content.

Take-Two Interactive has raked in substantial revenue streams from monetized online games such as Grand Theft Auto Online. In fact, microtransactions and in-game consumer spending made up 50% of all digitally-delivered net revenue for Take-Two's 2016 fiscal year, pulling in $460.85 million from recurring consumer spending.

It'll be interesting to see how this Battleborn experiment pays off, and what kind of affect it'll have on the game's dying playerbase and Take-Two's quarterly earnings. 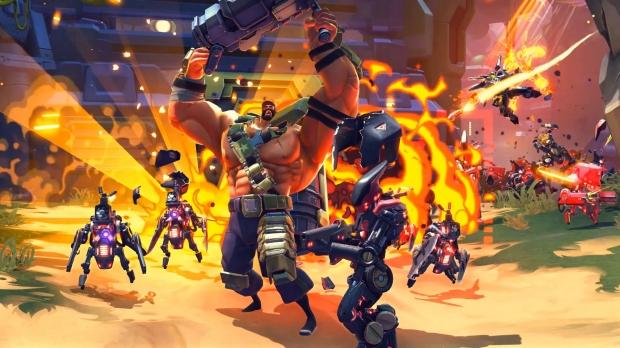 Battleborn now has a Free Trial, what does that mean?

The Battleborn Free Trial is a whole new way to experience Battleborn without having to pay a dime. The Free Trial encompasses UNLIMITED Competitive Multiplayer play, including access to all four competitive multiplayer modes, a rotating roster of free playable heroes, and the same character and account growth and progression you would find in the full game.

Yes, with the Free Trial, you can play UNLIMITED Competitive Multiplayer matches, no time limits or artificial level caps. Everyone who downloads the Free Trial will have access to all four competitive modes: Incursion, Meltdown, Capture, and Face-Off, with a fifth mode, Supercharge, arriving on Thursday, June 22, 2017.

Each Free Trial player will also have access to a subset of Battleborn's 30 unique heroes through a rotating roster of six heroes that changes weekly. Love a hero and want to keep playing after the roster changes? No problem! Unlock your favorite hero from the in-game Marketplace using Credits earned while playing matches. Or with Platinum premium currency, unlock your favorite heroes and customize them with a myriad of skins and taunts.

Not ready to upgrade?

Not a problem! There are many a la carte options to suit how you want to play. Check out the in-game Marketplace to get as many extras or as few as you want. From boosters that will increase your XP gain for a day, to the full package of Season Pass content complete with five Story Operations and heroes 26 through 30. The choice is yours.

In the Marketplace, you'll find a number of items that can be purchased with Credits earned in-game or Platinum premium currency.

Story Operations, individually or as part of the Season Pass bundle

What if I already own Battleborn? What's in it for me?

The goal of the Free Trial is to open Battleborn Competitive Multiplayer up for everyone in the world and grow the player base. We hope this endeavor leads to tons of new players for you to play with and against in PVP.

More so, it has been a joy and a privilege to interact with the Battleborn community over the past year, and we want to show you how much you mean to us. We consider you our Founders and we've created something special just for you. Everyone who purchased and played the retail version of Battleborn prior to the release of the Free Trial on June 6th, 2017, has been granted a Founder's Bonus. When you log into Battleborn, the Founder's Bonus will already be granted to your account. Head to your Command center to open the new loot packs, equip your title, and spend that sweet Platinum.

1 of each Command Faction Pack (5 total)