I love it when video games leave a distinct impression and make you think. Team 17's new unique sci-fi game Genesis Alpha One has done both, and I'm genuinely intrigued.

"Humankind's last chance to save our species...is to create a new one"

Indie dev Radiation Blue's new game Genesis Alpha One has ignited my imagination. Aesthetically, it looks like it'd be at home in the Alien franchise, and I see shades of 80's style sci-fi from the greats like John Berkey, Kubrick and Ralph McQuarrie.

There's a synthetic sterility to it all that really invokes this true feeling of cold, heartless androids or genetically-modified nonhuman clones. Its space without the celestial wonder: the dark, deadly and foreboding space, the space where no one can hear your scream. The space that's our future and our damnation all-in-one. 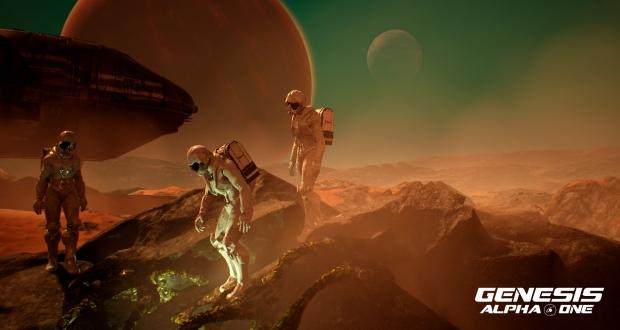 In this short trailer and the accompanying screenshots I get a very real sense that we'll essentially be playing a sci-fi novel.

To extend that feeling Genesis Alpha One shifts gears quite a bit--like the genetically modified clones onboard the ship, the game is a cross-bred hybrid: one parts FPS, one parts base-building, one part survival and one part roguelike all wrapped into one. 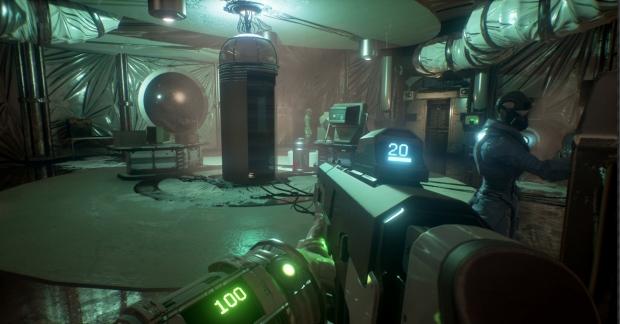 You'll be able to build up your ship and interstellar base as well as land on planets and explore and gun down enemies in FPS battles. And the game does all of this in a very distinct VHS-like style that'll really resonate with anyone who grew up with old-school sci-fi flicks, TV shows and books.

If this wasn't enough, the game will have randomly-generated galaxies and systems to explore, all teeming with hostile aliens. 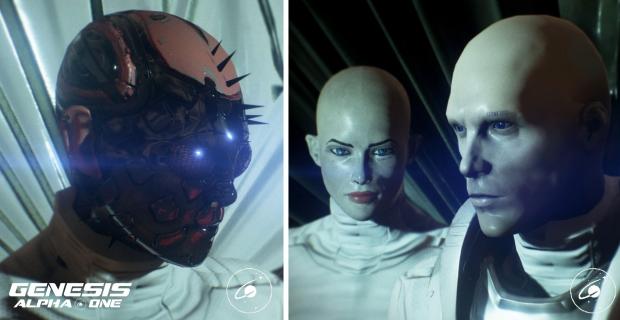 And clones. Lots of clones.

In fact, the entire purpose of the game is to seed humanity's DNA throughout the universe to ensure the human race lives on. You'll be playing a god of sorts and likely mixing and matching genetic code to create clones and human-alien hybrids--all in the name of keeping our DNA active in the cosmos.

It just all has such a perfect sci-fi vibe that would be at home in a Twilight Zone episode or a Kubrick film. 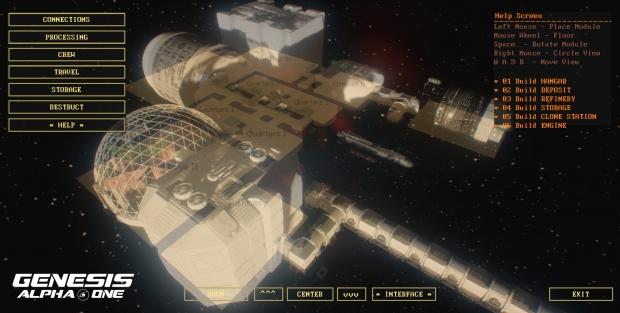 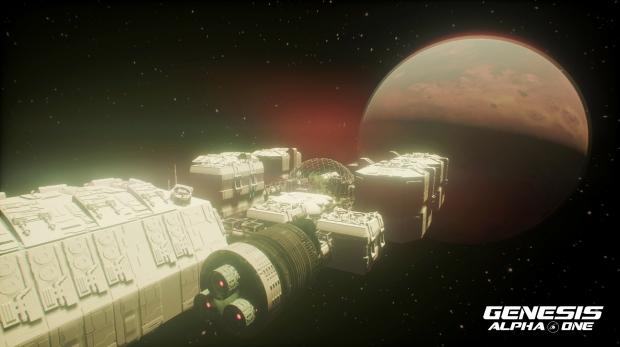 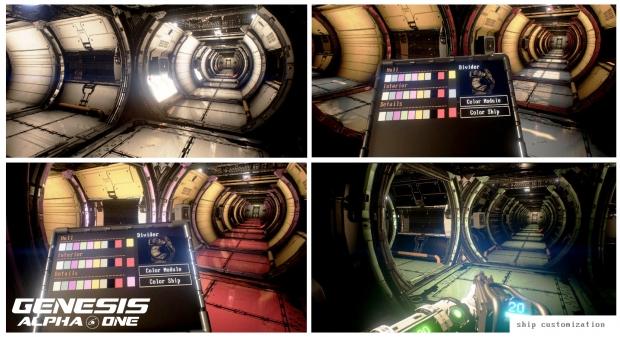 "As the Captain of a Genesis starship, you journey into uncharted space on the ultimate mission. Build and manage a space vessel, farm resources, deal with terrifying alien infestations, clone creatures and explore a vast, randomly generated universe.

"Your goal: Find new homes for humanity's DNA and save the species from extinction." 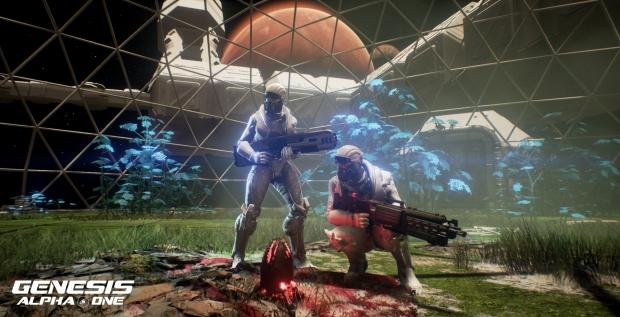 "In a near future ravaged by wars; corrupt regimes and global capitalism left unchecked have resulted in natural resource over-exploitation and pollution devastating the planet. Societies are collapsing. Supported by Earth's remaining governments, four influential corporations initiate the Genesis program." 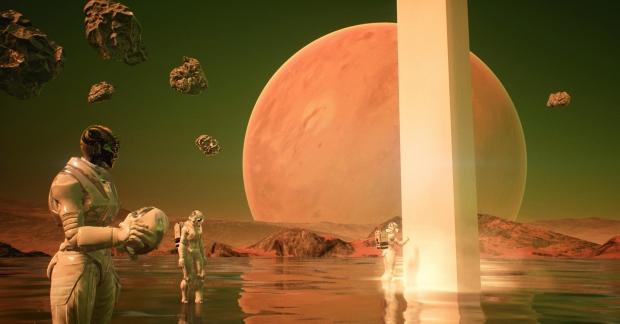 Genesis Alpha One is the first game from indie studio Radiation Blue and will be published on Team 17's label.

The devs used the flexible and powerful Unreal Engine 4 to make those eerie and dark ship environments (seriously they're straight out of a sci-fi author's imagination or an early 80's space thriller) and action-based FPS sequences, and I think they've done quite well so far.

Genesis Alpha One doesn't have a release date and is currently in alpha form, but it will be available on consoles and PC when it drops. Check below for a huge list of features and a massive gallery of screenshots after that. 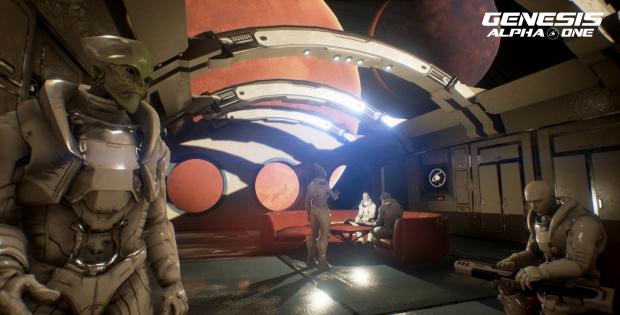 BUILD AND MANAGE YOUR UNIQUE STARSHIP

Your ship carries the future of humanity and it's up to you to gather up the necessary resources to traverse the vast ocean of space in order to find a new home for humanity. Starting with a small vessel, you'll have to build and maintain an intergalactic ark by combining dozens of upgradable ship building modules including crew quarters, workshops, hangars, clone labs and greenhouses.

You'll have to consider every option as you customise your ship to your playstyle. Will you focus on tactical defence, energy consumption or cargo capacity? Enter build mode to develop the vessel and then instantly enter the ship in first person to explore your creation.

Every journey in Genesis Alpha One begins with a huge, randomised galaxy filled with adventure and peril. Discover new planets, encounter asteroid fields, sun storms, rogue commanders and deadly cosmic spores as you explore the vastness of space. You'll come across the wrecks of ships that have been lost to the void, and off-ship expeditions will take you to the surface of alien planets to harvest their resources.

Humanity is extending its grasp further than ever and you'll quickly discover that they aren't alone in the reaches beyond the boundaries of known space. Every contact with a new place runs the risk of introducing the player to alien lifeforms.

Alien infestations can spread quickly, contaminating the ship and crew. It's imperative to wipe them out at the source before you become overwhelmed and your ship is destroyed! In first person perspective you'll take up arms against the intruders, crawling through vents and waging battle in space hangars.

As your ship grows, so must your crew. Using ground-breaking cloning technology, your crew will expand to meet the needs of the ship.

Science has gotten humanity this far, and its power will need to be harnessed if the ship is going to be able to find a viable planet to call home. Take DNA from the aliens you encounter across the galaxy and splice them with members of your crew to give us a chance to prosper with new abilities far beyond what we previously imagined.

HARVEST RESOURCES FROM THE VASTNESS OF SPACE

Roaming the immense universe won't be possible without gathering resources through planet harvesting. Elements such as Iron, Copper, Uranium and Plutonium must be mined from planets and then refined on-board your ship. These will be utilised to build new modules, weapons, clones and tools.

But be careful - you never know what your harvester might bring back with it from alien worlds!

UNCOVER THE STORY OF THE GENESIS PROGRAM

Uncover the depths of an expansive lore and with immersive narrative elements. Events on Earth progress much faster than on board the Genesis ship - each light speed jump will fast-forward events on Earth by several years. From distant, deep space, players will see wars starting and ending, corporations rising and their agendas changing, people being born, growing old and dying.

In a science fiction story of biblical proportions, the crew of your ship will seek out the perfect home planet for the clones you have created during your expedition and initiate a Genesis. After a Genesis is initiated, your reward will be based on the fate of your settlers in 500 years' time.

The choices you make throughout your playthrough will determine what humanity becomes and where they find their new home. You'll have to match the DNA of aliens with that of your clone crew to settle on the new world. 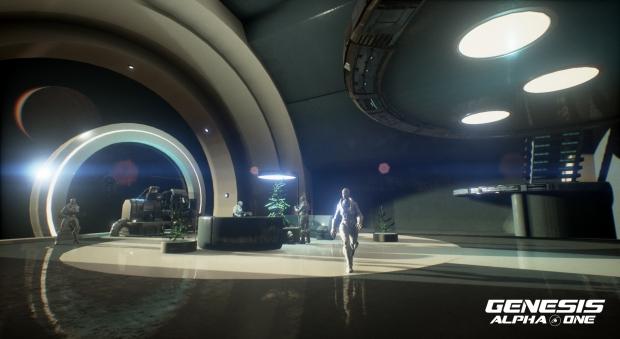 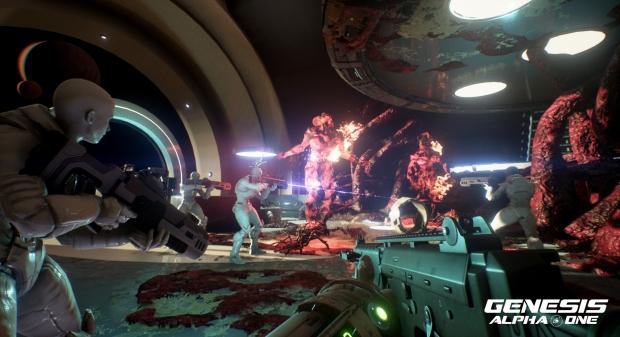 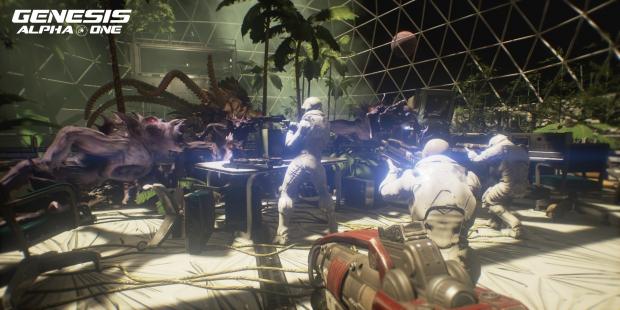 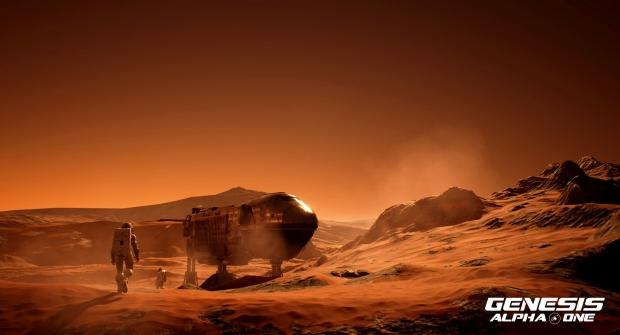 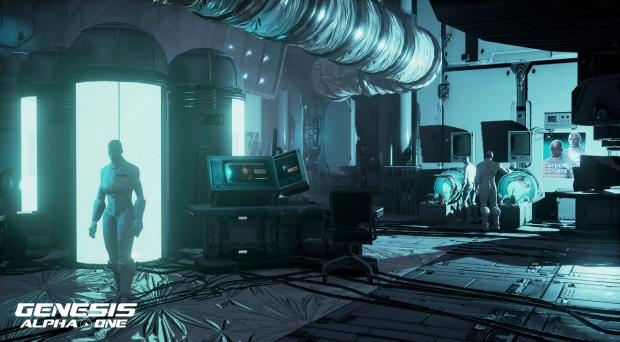 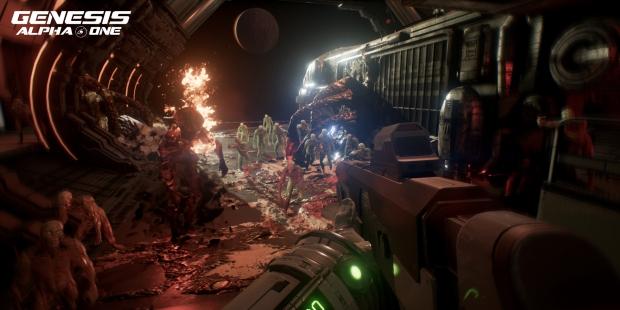 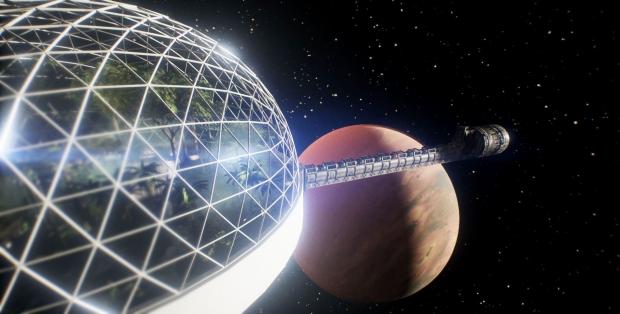