MSI today announced the winners of its VR Jam contest, which had over six hundred teams across 72 countries competing for a chance to win awesome prizes from MSI, including its GP52M VR gaming laptop and its high-end Aegis X gaming desktop. 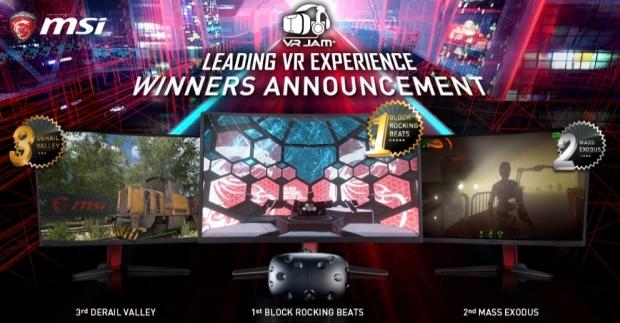 The MSI community choice award goes to Ghost Alpha Project, a VR game that sees players as a futuristic ninja that wields transforming lightsaber-like weapons to wreak havoc on their foes. Oh man, that sounds like a blast.

"In the competition entries, we discovered many wonderful creative contents from numerous developers; VR JAM is a driving force in VR ecosystem that further adds to its sparkle and vitality. With MSI's core faith of commitment and dedication to the best and innovative gaming experience, MSI is glad to look forward to more amazing VR JAM works and is willing to be the promoter of the VR games," said MSI Marketing director Sam Chern.

Furthermore, the best is yet to come, MSI will also be giving away the world's smallest VR-Ready gaming desktop "Trident" as a special prize for the winner of the Community's Choice Award!

You can see trailers of each of the winning VR games below, and check out the schedule for the crowning ceremony in Taipei.