With The Last Guardian finally coming out of its almost ten years of development hell, the desire for this game surprises Sony in the form of the pre-order numbers.

According to an interview with Sony's product manager, Joe Palmer, by MCV, he said: "I can't comment with specific details, but I can say that pre-orders for The Last Guardian are exceeding expectations," he said. "We've seen a really positive response to the Collector's Edition in particular, which despite its higher price point proves there's a huge appetite for the game."

When MCV asked Mr Palmer about if the development team cared about the hype that have been building throughout the years, he answered the team didn't pay attention to it too much. Palmer explained: "We've tried to avoid fuelling the hype by playing on the fact that people have been waiting a long time for this"

The Last Guardian will be available on December 6th, 2016. Here's just some personal thoughts on why I think it might be among one of the greatest game of 2016:

The story of The Last Guardian revolves around a boy, who we don't know the name, and Trico, a creature resembling a griffin but I personally find its appearance very similar to a dog with bird feet. The two will bond together in a journey to escape their prison and guards which they were kidnapped.

Yet, one very striking art decision of the game is the appearance of the boy and Trico. As you may see in the trailer, the boy has a cartoon appearance in contrast of the more realistic Trico and the surroundings. I think one of the reason of the boy appearance is much like a vessel to let the player immerse into the game and consider Trico like a real pet.

This is one of the main key feature for a game like The Last Guardian: letting players immerse in the game world and build that bond with the creature as it is in real life. The creative director Fumito Ueda could not stress enough over this fundamental in a interview with PlayStation.Blog: "I would have to say that it's what we were able to accomplish with the character of Trico. Its behavior, everything about it. "We were basically breathing life into a creature that has never been created, a new character, which is very difficult." , he added. Mr. Ueda continued: "How does it feel to actually feed Trico? I want players to experience what that feels like."

I personally think that this bond will be something extremely powerful for the players since it will be delivered to them via their interactions with Trico and how Trico react back to them. Why? Because the boy's language is total gibberish. So, each of your little actions via the boy will result in a move or little cry coming from your creature. This makes the gameplay with your companion much more lifelike.

If you got an pet by your side, you are going to understand this. Animals doesn't understand our language but they react to our actions, how we treat them and our emotions. Based on the demo and gameplay we've seen so far, I think they nailed this perfectly.

I've heard numerous reviewers criticizing Titanfall 2 campaign main character Jack Cooper for him being generic and I think I will see some of them calling the boy from The Last Guardian bland too. However, folks need to realize that both of these characters are intended for the player to take their place and experience the bond between them and their in-game companion. The bond is the main piece of cake here. The tale is you who are going to make it. The rest of the lore is just the background of the painting.

While we are on this subject, do you guys remember the first three Halo games on how bland Master Chief is? What you will likely to remember is your bond between you and Cortana. At the end of Halo 2, how heartbroken were you when you had to part ways with her? How much it meant to you when you get her back in Halo 3? I like to see Halo be the grandfather of this genre of story telling.

Titanfall 2 Jack and BT's relationship is built on mutual care and what I see in The Last Guardian is the potential to top off both of these fantastic games by delivering its storytelling via actions. We all know that actions speak louder than words. I just hope it will not be a short journey like what we've seen in Titanfall 2. 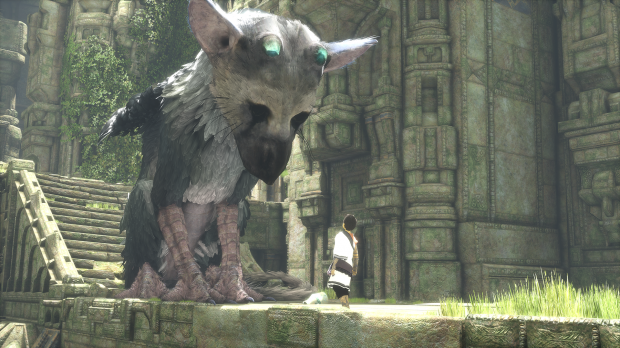