The new God of War game was a surprising addition to Sony's E3 2016 press conference, and the reveal footage left fans with many questions. Luckily Sony Santa Monica has jumped in to explain a few things, emphasizing that the game is all about the pre-Viking era where gods and fantastic, world-breaking beasts roamed the Earth.

"It's a fun space to be in because it allows us to paint our own image of Norse mythology as opposed to anyone else's," Sony Santa Monica game director Corey Barlog told GameSpot.

God of War won't be set in the Viking age, however; it'll be set way before the age of Vikings during the time when the fog of myth and legend was first formed--that strange era where gods walked the Earth alongside man.

"A lot of people think Norse, they think viking, but there's really this amazing prehistory--the migration, and then prior to that, the pre-migration era. In the viking era 'The gods have abandoned us' [is a big theme]. Thor and Loki and Odin all walked the Earth at one point, but they're not around any more. [The vikings] fight for them, but [the gods] are not there. What we're saying with [the new God of War] is 'We're at a prehisory point, where gods did walk the Earth, when monsters were real, before they became extinct',"

The reveal footage actually teases some of these gods and mythical creatures. As Eurogamer notes, the footage is absolutely filled with bizarre oddities that hint at major in-game adaptations of Norse mythology. The trailer clearly shows various mythical Norse creatures like the ferocious dragon Níðhöggr, who swoops across the skies at the very end.

This pretty much indicates God of War takes place during Ragnarok, the massive grand royale battle between all the Norse gods that pretty much breaks the world--and then resets it into a fertile paradise.

Here's how Wikipedia describes Ragnarok: "In Norse mythology, Ragnarök is a series of future events, including a great battle, foretold to ultimately result in the death of a number of major figures (including the gods Odin, Thor, Týr, Freyr, Heimdallr, and Loki), the occurrence of various natural disasters, and the subsequent submersion of the world in water. Afterward, the world will resurface anew and fertile, the surviving and returning gods will meet, and the world will be repopulated by two human survivors."

Sharp-eyed gamers have also noticed the "World Serpent"Jörmungandr slithering through a forest, rippling giant alpine trees in its path. This is yet another indicator that Ragnarok has started.

Furthermore, we also get a glimpse of what could be the maniacal trickster Loki, and fans think this could mean Kratos somehow ascends into Odin and his son as the thunder-god Thor.

Again, these are all speculations, and we have no clue how exactly Sony Santa Monica plans to adapt Norse mythology into the game. Barlog clearly states that the studio will adapt ancient Norse mythology in their own way, so don't expect any literal source material translations to pop up in the game.

The new God of War game doesn't yet have a release date, and will likely release on both PS4 and Sony's new 4K-ready PlayStation Neo consoles. 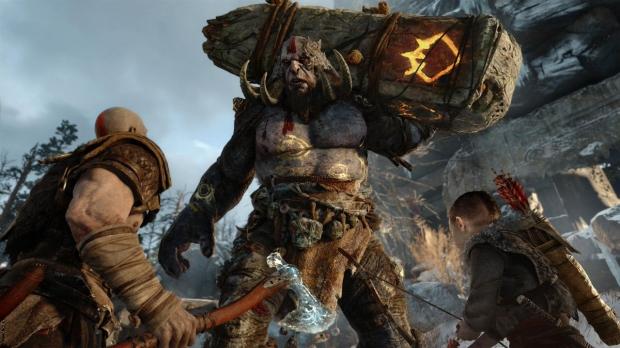