Battlefield 1 surprised most people, with its throwback to the World War 1 days, but we're only finding out now that the original pitch by DICE for the WW1 theme was 'totally rejected' by EA.

EA's Executive VP Patrick Söderland didn't think the WW1 theme would appeal to players, saying that a game focused on trench war couldn't "be fun to play". During EA's recent Investors Day, Söderland said: "It wasn't the most obvious choice. When the team presented to me the idea of World War 1 I absolutely rejected it. I said 'World War 1 is a trench war, it can't be fun to play".

Söderland added: "The team continued and persisted in the fact that this can be fun, and showed up with a very short demo that convinced me at least that this was the right path. The good news is whenever you take creative risks and it works, you actually can get to substantial success". He continued, finishing off with: "I think that the World War 1 theme is resonating with players out there, I think we have done something that will be right for the franchise and right for EA [but] we have to remember that so far we've only shown one trailer, and yes it's gotten a lot of success, but what's important is now we have to go back and make sure we deliver on the full promise of what Battlefield can be - and that we will do".

Judging from the gargantuan praise and hype that Battlefield 1 has built so quickly, I'd say that DICE's push for the WW1 theme was perfect. It was what the fans wanted, and not another copy/paste cash-in like the Call of Duty franchise has become. Remember to check out our thoughts on what Battlefield 1 needs to get right, which is a deeper dive into what EA DICE needs to really nail with their new first-person shooter. 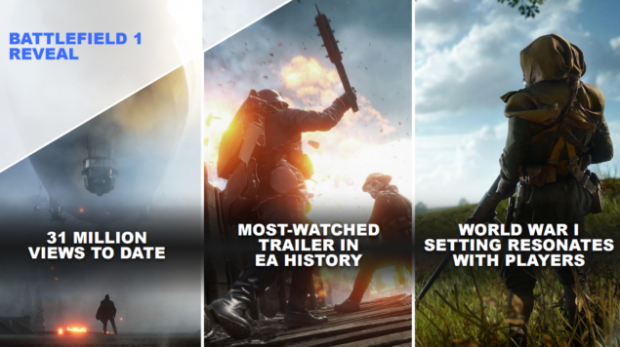