Star Ocean: Integrity and Faithlessness is indeed coming to the west with a confirmed release date of June 28th, much sooner than we might think for such large localization project (in language translation alone), but we in the west definitely aren't being left out. It's also available for pre-order with both a collectors edition and a day one edition with various benefits if you buy now. 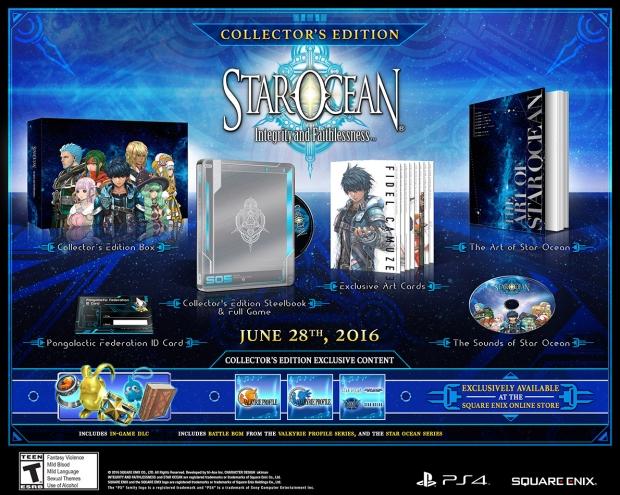 In an almost time-honored tradition, the collectors edition will actually contain quite a few interesting things to make it more valuable. Included inside the collector's edition box is a steelbook with the full game inside of that. They're also including an exclusive set of art cards that show off some of the original art that's been translated into the digital game we've seen. There's also an Art of Star Ocean book, a Pangalactic Federation ID Card as well as the original soundtrack on CD, meaning a lossless format that can potentially sound better than the normal MP3's. In-game you'll even get six different background battle themes from previous games to help motivate you not to die. Also included are some interesting, yet exclusive items to help you in-game, such as The Ring of the Valkyries, Gold Bunny Statue, Bushybrume Cincture, Wristlet of the Stars and Secret Sthalian Tome. The collectors edition is only available through the Square Enix online store for $109.99.

The Day One Edition obviously doesn't contain quite as much swag, but you will get a few things to help make it worth your while. Choose this and you'll get two extra background battle themes from Valkyrie Profile and Valkyrie Profile 2: Silmeria, that you can listen to as well as a download code for those unique items; The Ring of the Valkyries, Gold Bunny Statue, Bushybrume Cincture, Wristlet of the Stars and Secret Sthalian Tome. This version is available at any retailer for $59.99.

It actually wouldn't hurt to take advantage of being an Amazon Prime member and pre-ordering the game with a discount, only $47.99 for those that happen to be a Prime member.