Netflix has some of the best TV shows around, with original series like House of Cards and Orange is the New Black - but did you know their original content creation has increased by 185% per year? That's impressive. 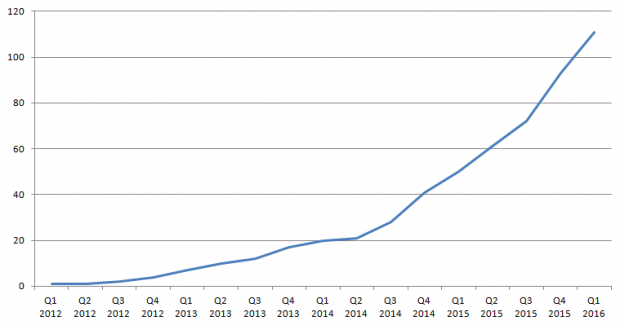 According to data published by AllFlicks, which has mined Netflix's online catalog and cross referenced it with Wikipedia's list of Netflix original programming - Cordcutting.com created a chart that shows the sharp rise in original content from Netflix. From Q1 2012 to Q2 2016, Netflix added 111 original series and films, an impressive feat to say the least.

We see a quarterly growth rate of 34.22%, and an average annual growth rate of an astonishing 185.41%. The future growth rate should be higher, with Netflix announcing it will spend a huge $6 billion on original content in 2016 alone.