Any blossoming action RPG in development, such as Exoplanet: First Contact, is going to want to have a wide variety of different set pieces to keep you interested, and to help you suspend your believe that you're in some far off land. Wildlife, pets, livestock and creatures in general, especially in a far off star system, are just as important as the landscape to make it a unique and ultimately fun experience. Moving battle fortresses make it that much more fantastic, because who wouldn't want to train one to walk around like a sail barge in the desolate landscape. 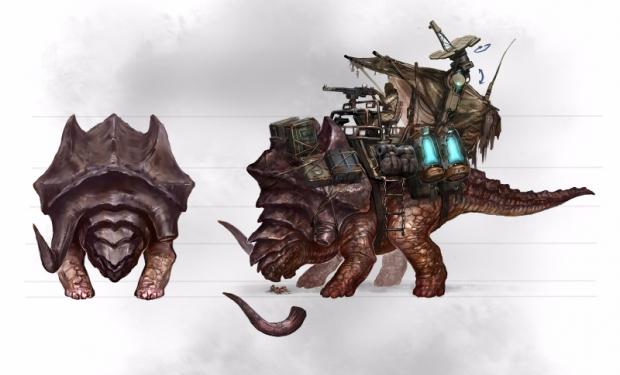 Moving battle fortresses make it that much more fantastic, because who wouldn't want to train one to walk around like a sail barge in the desolate landscape. But the real reason why they're being added to the game is due to the desolate frontier that you'll be exploring. Fuel is an expensive commodity, one that costs far more than the grass upon which this delightful herbivore would nom upon. Meaning it's easier and cheaper, and better, to get around on the back of a massive creature than in the relative comfort of a small ship.

The idea is only in the planning stages, but the possibility of having a customization mount (akin to ARK perhaps, but better) could easily come to fruition here. Nurture your mount from a wee babe and then equip specially crafted armor, weapon mounts and even prison modules, or others, to customize it for your occupation of choice. What a way to get around, even if it's slightly slower than zipping along at high-speed in an covered, craft.