If you're anything like me, then you've been experimenting with Fallout 4's console commands on PC to set up some insane battles. YouTubers like Tyrannicon and Cosmic Contrarian have recorded some pretty epic wars, and now the latest over-the-top battle pits 300 Brotherhood of Steel against a GPU-crushing 30,000 Deathclaws. Who will win?

As someone who's spent a good chunk of time setting up his own battles, I can say that this sequence is quite impressive, and I'm really amazed that the user was able to squeeze that many Deathclaws in without the game crashing or bogging down to an unplayable 2 frames-per-second. My AMD Radeon R9 290 starts to lag when I set up battles with around 1,000 or so NPC's, so I can only imagine what kind of rig Cosmic Contrarian uses for these videos.

If you'd like to set up your own insane battles like these, be sure to check out our Fallout 4 console commands tutorial that tells you everything you need to know to recreate epic wars. You'll be surprised how easy it actually is. You can spawn any NPC in the game, from the Terminator-like Robot Bosses and interstellar aliens to the destructive Legendary Assaultron Dominators and Legendary Brotherhood of Steel Commandos.

Be forewarned that spawning baddies can put a strain on performance, so it's not recommended unless you have decent hardware. If you don't feel like using the console to search up NPC codes, this Creature Spawner mod will take some of the tedium out of the setup stage.

Also be on the lookout for a new battle series from us in the near future--we've got something extra special lined up that will assuredly make you smile. 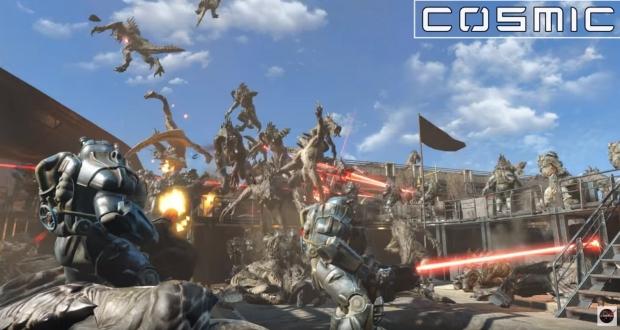