I have to say that playing around with Fallout 4's PC console commands is almost as much fun as the actual game. Bethesda basically gives us the tools to become gods over the Commonwealth, letting us do whatever we want. The phrase "the world is your oyster" comes to mind, and using console commands you can shuck it all you want.

In this tutorial we'll not only give you some basic console commands, but we'll arm you with the tools to find any item ID in the game. So that means no more scouting websites and digging through posts to see if your favorite gear is up yet. Instead we'll show you how to find out with a simple command. Information is power, after all, and we aim to fully empower you with everything you need to have a blast with your godly abilities.

First let's start out with the basic commands. ID's for items, enemies and characters are only half of the puzzle. Think of the ID as the answer, but you still need the equation to balance everything out. In this short Google Doc you'll find a number of easy commands. Be sure to check this list of item ID's as a quick way to spawn goods. Apart from being able to spawn any item, NPC or boss in the game, the console adds the extra benefit of being able to earn achievements with buffs and cheats are active.

Now that you've scanned the commands, let's have some real fun shall we? I noticed a user named Tyrranicon has made some immensely entertaining YouTube video series that pits huge armies of Fallout 4 enemies against each other. The first video shows what happens when 50 synths battling 50 raiders, displaying some hilarious action to boot.

I always wanted to do something like this myself, so I scouted around and figured it out. Now I'll show you how to make your very own epic NPC battles. Our battles are going to be a little different: our monsters are going to be Godzilla-sized.

As it turns out, it's not that hard. All you have to do is know the enemy ID's you want to spawn and the console does all the work. Sadly I couldn't find any of the NPC ID's anywhere online...but I actually discovered a way to find them myself. 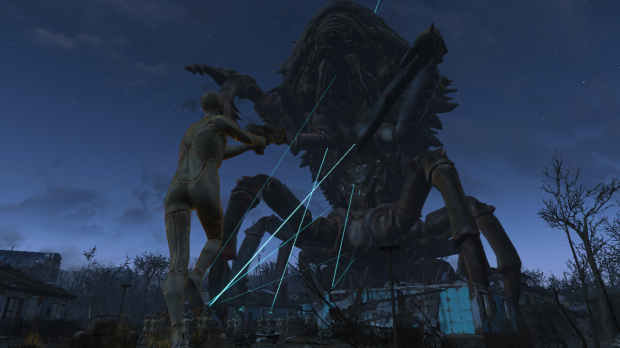 How to Make a Monster

To begin you're going to want to find a good open, level area to serve as your battleground. Then press ~ to bring up the console menu. Let's think about what kinds of baddies we want to use. Maybe Mirelurks? So let's use the console's help command by typing "help mirelurk 4", which will bring up the list of every spawn-able Mirelurk in the game.

This method works for anything in the game, so don't be afraid to use it to find the ID's of Power Armor, unique weapons and everything else. All you have to know is the actual name of whatever it is you're searching for. If you're looking to find what the ID is for T-60 Power Armor, just type 'help "T-60" 4' and every bit of T-60 armor will pop up.

There actually is a kind of trial-and-error methodology for using the help parameter to find ID codes. If you search for "Mr. Gutsy 4", for example, you'll just find ID codes you can't use for the spawn or placeatme commands. The strings literally have to say NPC next to them for the commands to work. So instead of searching for "Mr. Gutsy 4", search for "Gutsy 4" to find the right ID. The same is true for something like Diamond City Security; just search for the keyword "Security" instead.

Now let's fill out our region with a massive army of some of the most ferocious monsters around: Legendary Mythic Deathclaws. Just type "help Deathclaw 4" and you'll get a pretty sizable list of console ID's. With a quick scan of the results, we see that the ID for the Legendary Mythic Deathclaw is 002499DA. Now type "placeatme 002499DA 3" and voila, three savage monstrosities pop into existence. 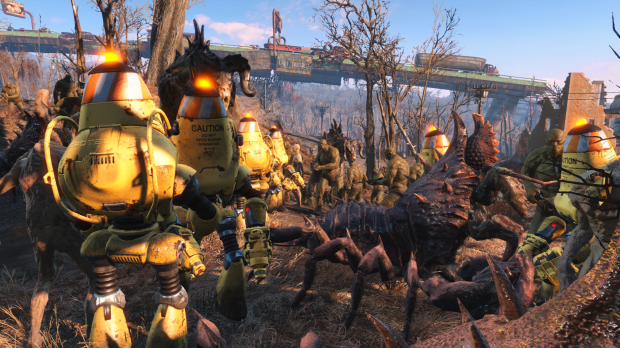 Since our monsters are spawned, let's size them up. Click on each one and type "setscale 10" to magnify them into cloud-chomping, Chuthulu-sized titans. This is just an example of what you can do, and if you just want to have normal fights that's fine. But I really enjoy watching the crazy Godzilla-style battles.

This battle is a bit incomplete, so let's spawn some tough Mr. Gutsy bots to act as the opposing force. Using our handy help command, type in "help gutsy 4" to get the ID for Legendary Major Mr. Gutsy's 000249aef ID. Now let's spawn our massive robots. Simply type "placeatme 000249aef 3" to pop up three robots, and go through the same scale-setting we did with the Deathclaws.

At this step your monsters should be absolutely massive and ready to devastate entire cities. While this section was just a primer, feel free to initiate combat for some terrifying results. Just make sure you have godmode turned on beforehand. For quick, easy reference I've included the ID's of powerful monsters you can use in your battles: 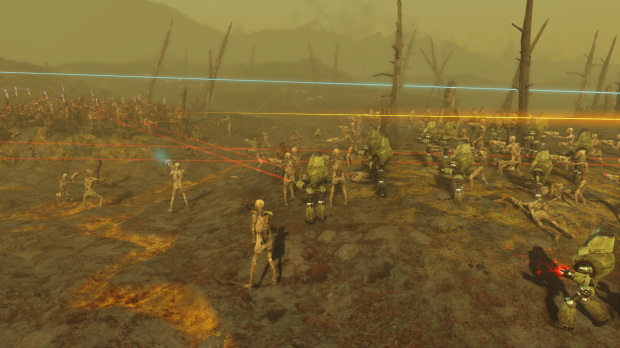 Now that you know how to set up your monsters, let's get right down to some battling. We need a fresh canvas so you'll want to load up a saved game to clear the area or move to a different region and start anew. Be warned that being able to do epic-scale battles largely depends on your hardware; a 200 raider vs. 60 Mr. Gutsy battle lagged my AMD Radeon R9 290 to all hell, so take that as a general standpoint.

This is the method I use to set up my battles. First off let's use the console code "tgm" to turn on godmode. Secondly you want to use the "tai" and "tcai" commands to not only toggle the AI intelligence, but switch off their combat ability. Some baddies--like the Mr. Gutsy--will just start blasting lasers as soon as they spawn and you don't want that.

Next up let's build our forces. You can choose whatever baddies you want for reach side provided you know the ID, but for the sake of the tutorial I'll go with the Mr. Gutsy vs. Deathclaw action. For this battle let's try maybe 10 Deathclaws and 20 Legendary Major Mr. Gutsy's--yes, the Deathclaws are that strong, especially when they mutate!

If you plan to scale your monsters for gargantuan battles, be sure to drop them in one at a time. Also space them out because multiple clusters tend to bunch together, making it really hard to gigantify each enemy. You'll have to embiggen each enemy one-by-one so remember to pace them out a good ways. 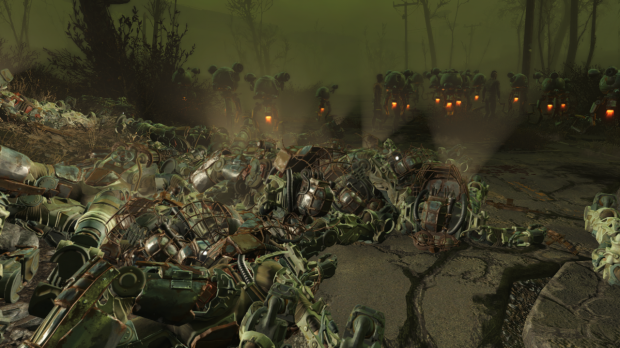 To observe all that havoc, you'll want get a great viewcam going with the "tfc" toggle flycam mode. This adds a nice sports spectator camera angle that's perfect for let's plays, screenshots and video recording. Make sure you turn on the flycam after you spawn the enemies because the baddies will float in the air.

Here's a quick checklist of what to do:

Sometimes the enemies just won't attack each other. This will happen every now and again, and if it occurs just swap out the NPC ID's for another set of monsters or NPC's. Synths versus Raiders almost always triggers, as does Brotherhood of Steel versus Synths or Super Mutants. You might have to mix and match and run a few sessions of trial and error, but it's worth it.

One of the most important things to remember when setting up these battles is the scale. If you're doing something really crazy, choose a wide-open space. Or better yet, make a dueling ground in your own settlement that's specifically designed for brutal arena-style chaos. Honestly the possibilities here are endless, and I myself am keen on trying out some amazing combinations.

We hope you've enjoyed our little console command tutorial, and I've personally aimed at giving you the tools to create some truly epic and memorable occasions. Not that Fallout 4 on its own isn't epic or memorable, but this kind of entertainment is on a league of its own. If you use this method to make your own insane battles I would love to see them, so feel free to leave a link the comment section or drop me a line.

Special thanks to Tyrannicon for the inspiration!