Intel is about to drop the rest of its Skylake processors into the market, after the release of the Core i7-6700K and Core i5-6600K just recently. There will be eight more processors released, but the rest of them will not be unlocked models for overclocking. 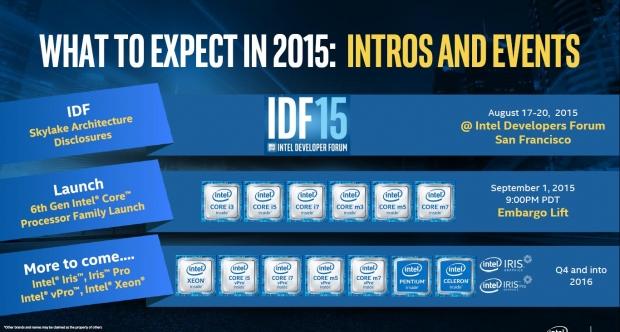 The chipmaker will be offering up 10 total SKUs, with two of them already in the wild. The remaining 8 processors will be made up of four 65W, and four 35W low TDP chips. All of these processors will slot into the new LGA 1151 motherboards using the Z170, H170 and B150 chipsets. The new Skylake-S processors are as follows:

The most noteworthy chips out of the Skylake-S lineup are definitely the Core i7-6700K and Core i5-6600K as they are the unlocked, overclocking ready CPUs. But, the Core i7-6700 will feature a 3.4GHz frequency with 4GHz boost making it a viable alternative to the 6700K if you don't want to overclock. The 'low TDP' chips in the form of the Core i7-6700T, and the three other Core i5 processors with the 'T' moniker will be decent processors for low-power devices.

The Core i7-6700T will include a 2.8GHz frequency and boost clock of 3.6GHz, packing 8MB of L3 cache and a TDP of just 35W. Not too damn bad for a processor that can clock all the way up to 3.6GHz. Intel will soon be unveiling other processors in the Skylake family in the near future, with the Skylake-U, Skylake-H, Skylake-H Xeon and Skylake-Y families being unveiled in the coming months.