Those looking for the ultimate in NAS performance have long yearned for SSD specific NAS models. 2.5" NAS models offer a slim design and impressive density, but adding in SSDs can actually provide a big capacity bump along with increased performance. Due to popular demand QNAP has released the TS-451S Turbo NAS, the first consumer NAS unit designed for SSDs. 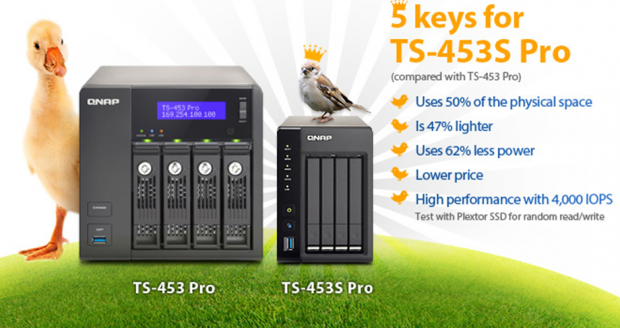 The four-bay TS-451S Turbo NAS features a quad-core Celeron 2.41Ghz processor and comes with 4GB of DDR3L, which can be easily increased to 8GB. The Turbo has a low price point that is similar to HDD NAS models, so users do not have to pay a premium for the 4,000+ IOPS performance, at least for the NAS. SSDs are selling as low as 35 cents a GB, so users can find plenty of economical SSDs on the market. SSDs are well-suited for NAS environments due to lower power consumption and totally silent operation. The new TS-451S Turbo will be available within a month.

QNAP has also renamed the SS-x53 (an SMB model designed for SSDs) to the TS-453S PRO for the 4-bay option, and the TS-853S PRO for the eight-bay unit.