Intel's upcoming 14nm Xeon Phi, or Knights Landing CPU, will reportedly feature an insane amount of technology compared to what we see now in the Xeon range. The new Knights Landing CPU will see Intel increase the performance, throughput, and total TFLOP count with the next generation MIC (Many Integrated Core) card. 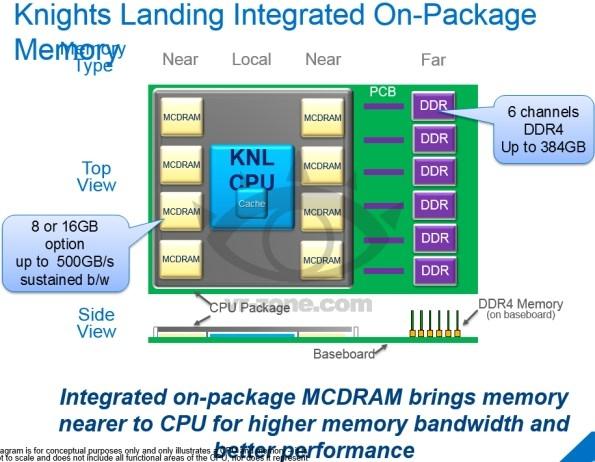 Intel's Knights Landing will be based on the company's Silvermont CPU architecture, which we see in the Bay Trail mobile products. Knights Landing on the otherhand, will support 512-bit AVX operations, and a new mesh interconnect architecture which will see 72 cores to ship on each PCB.

The new CPU with 72 cores on-board will also see 16GB of on-package eDRAM, and six DDR4 memory controllers which will be capable of seeing over 384GB of DDR4 memory. Then we have the rumor that Intel could abandon PCI-Express 3.0 because of its latency issues, and shift over to QPI which will ship with the Skylake-EX chipset.

One of these Knights Landing CPU should arrive with a TDP of 300W, but would see an amazing increase in performance for the power required. Knights Landing will arrive in 2015, and will meet NVIDIA's next-generation GPU released to the HPC market, maybe even a second generation.