Just before the holidays, Google has pushed out a new upgrade to its Glass platform, the December update, or XE12. The new update is available for Glass Explorers, just in time to take pictures from their point of view, of their Christmas dinners. The best updates seem to be the improved iOS support, Hangouts support, and the winking, which is going to have ladies across the world swooning. The full list of updates is below: 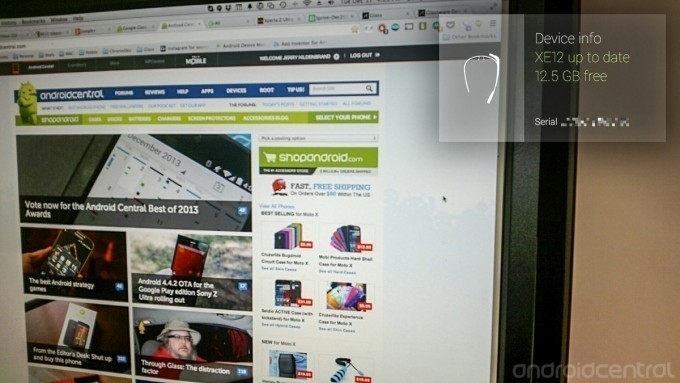 iOS app - as we noted earlier, XE12 brings along better support for iOS. Expect an update in iTunes later in the week.

Google Play Music support has been enhanced, and the new Listen menu will let you browse playlists and open radio stations if your an All Access subscriber.

Screen lock - set a screen lock from the settings menu and anytime you deactivate Glass or take them off (if you've set-up on-head detection) the screen lock will activate.

Hangouts Glassware - now you can send and receive chats, photos and make video calls with any Hangouts contact.

Wink - Explorers with a new model Glass (purchased or swapped after October 28th) can now take pictures via blinking. This works with the display off, and seeing the privacy outrage over this feature should make for loads of fun.

New Google Search features - searching for how far you are from a place or how many calories are in a food is now supported.

Removed Signature from Messages - no longer will your SMS messages say Sent Through Glass. Email will, though.

Removal of Guest Mode - maintaining Guest Mode was too much strain on the programmers, says Google. It is no more. Google recommends using a "demo Google Account."

So, now Glass users can take pictures just by blinking? Imagine being at a bar, and taking a picture of something near a woman... you're constantly blinking (or winking), this is going to end up with some incredible stories, and a few smashed Glass devices.