It looks like ASUS could have a great year in 2014 with its PadFone line of devices, with a new PadFone turning up on AnTuTu's benchmark database, which was pulled down quite quick. 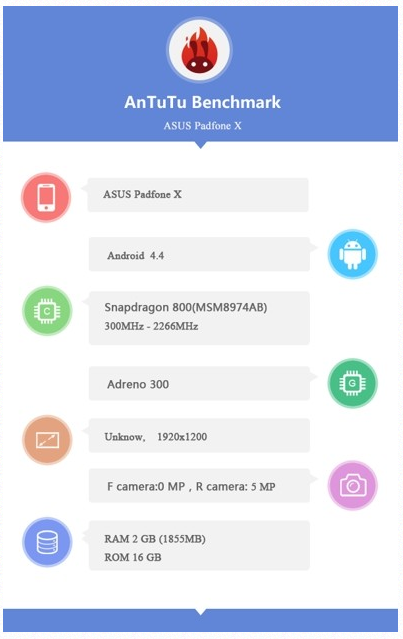 The PadFone X, as it was teased, featured the Qualcomm Snapdragon 800 SoC, Android 4.4 KitKat, and smashed into some benchmarks, smacking around a few of the established smartphone heavyweights. The screen resolution on the PadFone X should be 1920x1080, but we don't know what size just yet. 2GB of RAM is featured, and 16GB of on-board flash storage should make the cut.

We should see a 5-megapixel rear-facing camera, backed up by a decent front-facer, but that 5-megapixel camera on the rear is most likely a placeholder for something better in the final consumer version. We should be expecting 8-megapixel cameras by default now. ASUS should unveil the PadFone X sometime in early 2014.