Earlier this week, BlackBerry announced that its CEO, Thorsten Heins, would be stepping down as the company takes itself off the market and looks to rebuild with a $1 billion investment. While Heins departure might be just what the company needs, it is always sad to see the head of a company leave something he poured his life into. 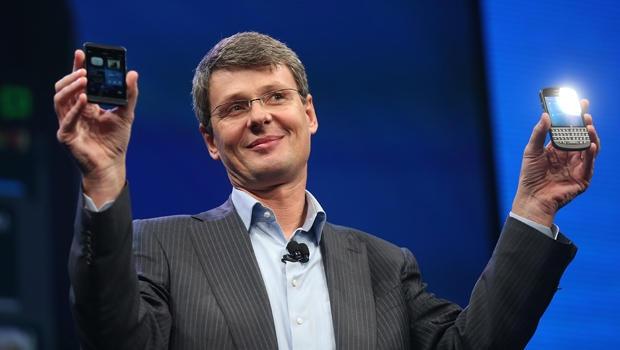 In a letter pinned to employees this week, Heins has expressed is gratitude to "BlackBerry team members," and said that he feels John Chen will make an excellent choice for interim CEO. He went on to conclude the letter by stating that he is "BlackBerry's biggest fan, and would continue cheering on the company from the sidelines. The memo also states that BlackBerry will be hosting a town hall later this week to address employee concerns, and answer any questions they may have. I have copied the letter below in its entirety.

I am writing to share some important news with you today regarding BlackBerry.

This morning, we announced that we have entered into an agreement to receive a strategic investment of U.S. $1 billion from Fairfax Financial Limited and other institutional investors, which is a vote of confidence in the future of BlackBerry.

Today's announcement also marks the conclusion of the review of strategic alternatives process being conducted by the Special Committee. After conducting a thorough review of strategic alternatives, we are pleased to announce this agreement that supports a strong future for BlackBerry. As you will see in the press release we issued this morning, this agreement also comes with some changes to BlackBerry's Board of Directors and management team, effective upon the closing of the transaction, which is expected to be completed in mid-November.

Today I bid farewell to this great company, but leave with the confidence of knowing that BlackBerry's future is in your capable hands. Together, we have accomplished a great deal over the past six years, and I thank you for your loyalty and dedication along the way.

John Chen, a renowned expert in technology and global markets, will be appointed to the position of Executive Chair of BlackBerry's Board of Directors and Interim CEO pending completion of a search for a new Chief Executive Officer. Mr. Chen's experience transforming Sybase from a mature technology company into a high-growth enterprise data management, data warehousing, mobility management and analytics innovator, as well as his deep roots in the technology industry will be invaluable to BlackBerry's future. Additionally, Prem Watsa, a long time BlackBerry supporter and one of Canada's preeminent investors will rejoin the Board as Lead Director.

I'm sure you all have lots of questions about what this means - and that's why we are hosting a town hall meeting later this week where you will have the opportunity to hear directly from the new leadership.

As always, it is important for BlackBerry to speak with one voice. Should you receive any calls from investors please forward them to Paul Carpino. Media and other outside inquiries should be forwarded to Heidi Davidson.

In terms of next steps, your day-to-day responsibilities will remain the same through this transition. As a team, each and every one of you plays an important role in BlackBerry's success, so I thank you for staying focused on delivering the high quality products and services that our customers have come to expect from BlackBerry throughout this transition.

You can continue to count me as BlackBerry's biggest fan. Please know that I will be cheering from the sidelines.