Yesterday it appeared that OCZ's stock was in a downward fall that was unstoppable before leveling off near the closing bell at $0.73. Today the stock fell yet another 38-percent to just $0.39 per share at its lowest, and like yesterday it rebounded slightly and closed at $0.44 per share. 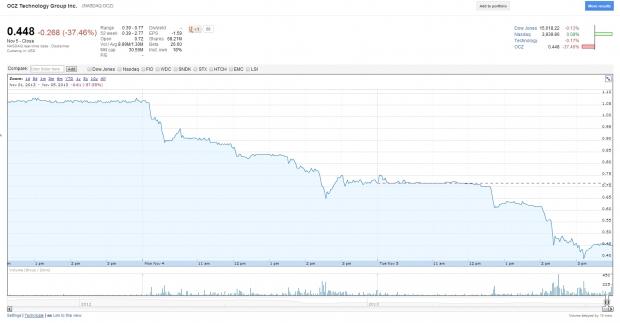 As of this posting, OCZ has yet to release an official statement, and this has further led to investor confidence falling. A quick Google search will turn up dozens of industry analyst questioning just how long the company has left before it is forced to fill bankruptcy, and even more complaints on forums across the internet where customers are complaining about failed Vertex SSD drives.

While I am still mystified about the company's lack of response to this crisis, I have developed a new theory on what may be going on. A few weeks back we reported that Toshiba might be looking to buy OCZ outright, but nothing ever materialized from this. I have a very small suspicion that OCZ may be keeping quiet in order to force their price even lower to draw in someone looking to pick them up at what might be a steal. This would wash the company's leaders hands of things and they would get off with a nice payday.