Earlier this week at the 2013 Intel Developer Forum, Intel announced the addition of two new products to its small form-factor NUC lineup, both of which feature the company's new Haswell processors. The D54250WYK sports a Core i5-4250U and the D34010WYK houses the i3-4010U. 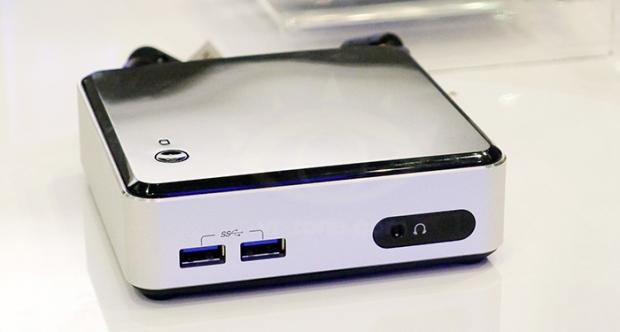 While both of these Haswell processors feature hyper-threading, only the Core i5 model supports TurboBoost, which can boost the processor's clock speeds up to 2.6 GHz when temperatures are favorable. The Core i3 model is stuck at its 1.7GHz clock and features a slower integrated GPU than the HD Graphics 5000 IGP inside the i5.

Other than the processors, the two models are basically the same machine. Both feature 4K monitor support thanks to DisplayPort technology, and a mini HDMI connector also provides additional video out connectivity. Gigabit Ethernet is also supported via a port on the back of the box.

You will need to bring your own memory, storage, and Wi-Fi to the party, but with a pair of SO-DIMMS and full and half-height mini PCI-Express slots, there is plenty of room for an mSATA SSD and wireless card. The NUC chassis measures in at just 4.59 inches by 4.41 inches and enclosure is only 1.36-inches thick.